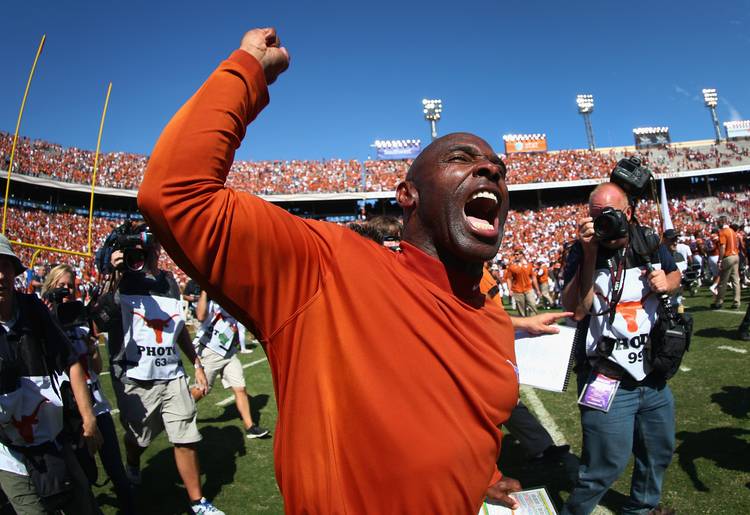 Texas coach Charlie Strong celebrates after the Longhorns beat the Oklahoma Sooners 24-17 during the AT&T Red River Showdown at the Cotton Bowl on October 10, 2015 in Dallas, Texas. (Photo by Tom Pennington/Getty Images)

Here’s our staff takes on the Longhorns-Sooners:

It’s almost comical how many fans have thrown up their hands and given up on the season, which is only four games old. Has it been frustrating? Absolutely. But Texas President Gregory L. Fenves won’t fire head coach Charlie Strong during the season, a university source said. Don’t shoot the messenger, people. Perhaps fans should — oh, and I’m just spit-balling here — support the team and coach they claim to love? If Oklahoma takes Texas to the woodshed, we can certainly revisit this topic. But I just don’t see the Longhorns laying down and getting steamrolled. This team must show up better prepared than it did against Oklahoma State. That’s why fans are up in arms, and correctly, I would add. Texas will play tough, but Baker Mayfield gets the last laugh in a close, high-scoring game.

Danny Davis: A Red River redemption, but whose?

Someone will find redemption on the Cotton Bowl, but we’ll have to wait to see if it’s Baker Mayfield, who has lost to Texas at both Oklahoma and Texas Tech, or Charlie Strong, who can use a one-week reprieve from media members and message board mercenaries who are calling for his job. If Texas is going to pull off its third upset of Oklahoma in a four-year span, the Longhorns are going to need to force one — let’s not get greedy here — or two turnovers and have either Kyle Porter or Tristian Houston step up as D’Onta Foreman’s backfield sidekick.

Is this the Red River Runaway signaling an Oklahoma blowout or the Red River Repeat, as in a repeat performance of Texas’ dramatic and thorough beating of the Sooners last year? I’ll be stunned if the Longhorns don’t come out with their hair on fire and stay in it for at least a half if not longer. But I fear Bob Stoops has too many weapons, better health at running back, more experience at quarterback and sad memories of 2015 for Texas.

Did you notice that Shane Buechele hasn’t really attempted a deep pass since getting blasted in the ribs at Cal? I believe the freshman’s ability to let it fly has been hampered by an injury or soreness in that area, which takes away a vital part of Texas’ offense. Speedy John Burt hasn’t been a factor since Cal because we’re not seeing the go routes Texas ran early in the season. If they can’t test this Oklahoma secondary with vertical routes to complement that running attack that’s missing Chris Warren III, the Horns will be in for a long day in Big D.