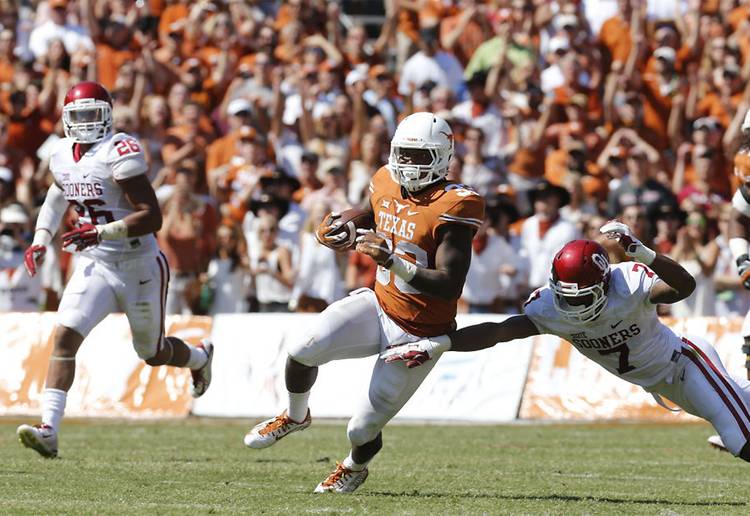 OCTOBER 10, 2015 - Texas running back D'Onta Foreman breaks away for an 81 yard gain in the second half of the AT&T Red River Showdown between Texas and Oklahoma held at the Cotton Bowl in Dallas, Tx., on Saturday, October 10, 2015. (RODOLFO GONZALEZ / AMERICAN-STATESMAN)

From picks to kicks, these plays highlighted or changed course of the last 10 Red River Showdowns.

2015: D’Onta Foreman didn’t score on the play, but his 81-yard run against Oklahoma led to the Longhorns touchdown that made the game 24-10.

2014: While Texas made a comeback at the end of the game, scoring two fourth quarter touchdowns, the Longhorns trailed 31-13 at one point. After taking a 3-0 lead in the first quarter, Oklahoma took the lead and the momentum eight seconds later with this:

2013: Texas Daje Johnson scored one of the longest punt returns in program history in this game, but let’s face it, Chris Whaley’s interception when the game was tied at 3-3 catapulted the Longhorns to Mack Brown’s final win over Oklahoma:

2012: Oklahoma beat Texas 63-21 in one of the worst loses in program history. It was not a good day for the Longhorns. Texas returned a blocked kick back for two points and trailed just 6-2 with 4:09 left in the first quarter. Then this happened, and Oklahoma was gone from there:

2011: More of the same. Texas lost 55-17 in one of the worst loses in program history. Texas running back Fozzy Whittaker did return a kick for 100 yards in the game, but Texas still trailed 27-10. This play probably sums it up best:

2010: Texas nearly had a chance to complete a comeback against Oklahoma. Trailing 28-20 with a about a minute left, the Sooners were punting to Aaron Williams. But the future second round NFL draft pick fumbled the punt. He probably should have called a fair catch:

2009: Maybe the 2010 play was karma for Williams. Because in 2009 his hit on Sam Bradford  knocked the quarterback out the game. Bradford had shoulder surgery and never played for the Sooners again. However, Landry Jones survived two interceptions to have Texas in position to beat the Longhorns, who would play for a national championship this year. Aaron Williams and Earl Thomas had fourth quarter interceptions that helped secure the win for Texas.

2008: Texas and Oklahoma were in a heated battle with Texas Tech for the Big 12. Texas beat Oklahoma 45-35 to stay in the thick of the conference race. Trailing 14-3 in the game, it was Jordan Shipley’s 96-yard kickoff return that changed everything:

2006: Oklahoma led 10-7 over the Longhorns and freshman quarterback Colt McCoy. But it didn’t last. McCoy  first touchdown pass of the Red River showdown gave Texas a led they never lost as they won 28-10: