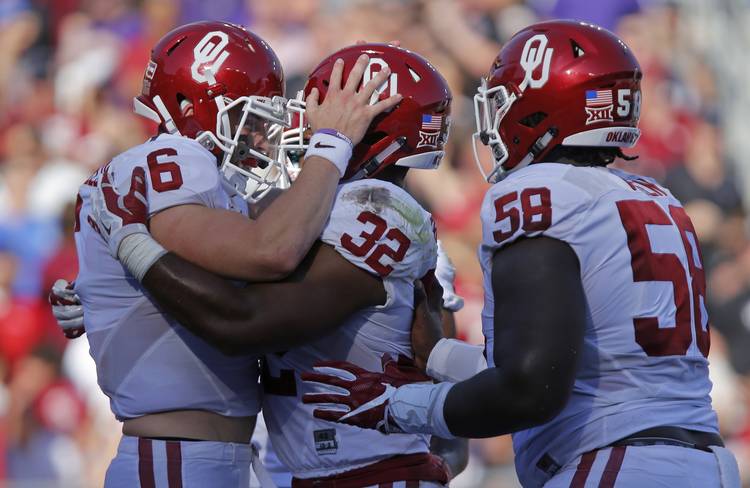 Oklahoma quarterback Baker Mayfield (6) celebrates his touchdown on a keeper in the first half with running back Samaje Perine (32) and offensive lineman Erick Wren (58) against Texas Christian at Amon G. Carter Stadium in Fort Worth, Texas, on Saturday, Oct. 1, 2016. Oklahoma won, 52-46. (Rodger Mallison/Fort Worth Star-Telegram/TNS)

On Saturday against Oklahoma, the eyes of Texas will be upon…

Mayfield — who was named after a UT booster and won a state championship at Lake Travis, virtually in UT’s own backyard — has thrown for 1,067 yards and nine touchdowns in his follow-up to last year, which saw him finish fourth in the Heisman Trophy voting. Mayfield is expected to play after injuring an ankle during last week’s win over TCU. He accounted for four touchdowns against the Horned Frogs. The two-time walk-on’s story is well-known, but one chapter is missing: Mayfield is 0-2 all-time against Texas.

Perine (247 yards on 50 carries) has been outrushed by teammate Joe Mixon (340 yards on 44 carries), but the Hendrickson product has scored a team-high four rushing touchdowns. Already the owner of the FBS single-game rushing record, Perine is closing in on Oklahoma’s all-time rushing record; he needs 810 yards to overtake Billy Sims’ career mark. Perine has scored in each of his previous two games against the Longhorns.

Oklahoma has sacked nine quarterbacks this season, and Okoronkwo has four of them (for a combined loss of 29 yards). A junior from Houston who recorded four sacks in his first two years, Okoronkwo ranks third among the Sooners with his 22 tackles. On Saturday, he’ll attempt to break through a Texas offensive line that gave up only one sack in last week’s loss to Oklahoma State.