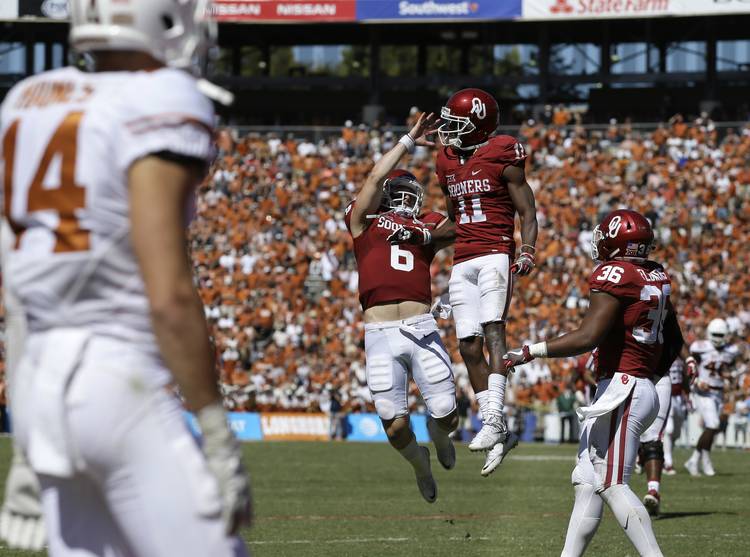 DALLAS – There were 168 snaps in Texas’ 45-40 loss to Oklahoma on Saturday. Here are five that ended up making a big difference:

1. Tackle… and then an interception

The Texas defense entered its fifth game with only one turnover, but Dylan Haines intercepted two passes during the first quarter of the Red River Showdown. Haines set up the first score of the day — a 33-yard field goal by Trent Domingue — on his second interception of Baker Mayfield, a relatively-easy catch that was returned 38 yards to the Oklahoma 13.

If Oklahoma fans were wondering who Mayfield was throwing the football to, the answer was Geno Lewis. Oklahoma’s senior receiver was trailed by P.J. Locke III on a crossing route, but he was taken out by Brandon Jones as the Mayfield let go of the football. No flag was thrown, though, and Texas set up shop in the Oklahoma red zone.

With the interception, Haines moved into a tie for ninth place on Texas’ all-time list. The Lago Vista native has returned his 11 interceptions for a total of 238 yards, which is 23 yards shy of Chris Carter’s school record. Haines needs seven more picks to break the school mark that Nathan Vasher and Noble Doss share for interceptions in a collegiate career.

Texas trailed 14-13 at halftime, but the low-scoring affair became a shoot-out during a third quarter that witnessed four lead changes. Texas grabbed its last lead when Dorian Leonard scored on a 45-yard pass from Shane Buechele.

Leonard’s score came at the expense of Oklahoma junior Jordan Thomas, who yielded a 63-yard touchdown to Devin Duvernay on the previous drive. Texas opted to attack Thomas throughout the game, a strategy that had mixed results. Thomas registered four tackles, four pass break-ups and a pass-interference penalty at the Cotton Bowl, and Bob Stoops said that Thomas played “as well as anybody that’s been here” during the first half.

“I lost those,” said Thomas of the second-half touchdowns. “Aside from that, it was a great game to have a lot of film to just correct myself on.”

Texas took a 27-21 lead on Leonard’s catch, which occurred with 10:43 left in the third quarter. Oklahoma responded 2 1/2 minutes later on a touchdown run from Mayfield.

A four-yard run from Mayfield gave the Sooners a 28-27 lead, but Oklahoma pushed that advantage to eight points on Dede Westbrook’s 47-yard touchdown catch. Westbrook weaved through a Longhorn logjam on a slant route, and he broke a tackle attempt by Edwin Freeman near the goal line.
Westbrook did not catch another football after that touchdown with 5:39 left in the third quarter, but the damage was already done. Westbrook, who played football at Cameron Yoe, registered a school-record 232 receiving yards and he scored on three of his 10 receptions.
4. Exchanging Miscues

Trailing by eight after Westbrook’s third touchdown, Texas went 3-and-out but was given a gift when Joe Mixon muffed a Michael Dickson punt at the Oklahoma 23. Texas, though, gave the football back three plays later.

Facing a 3rd-and-2 with over three minutes left in the third quarter, Buechele was intercepted by Oklahoma safety Will Sunderland at the 7. Sunderland cut in front of Armanti Foreman on the play, and both players appeared to have their hands on the football as they rolled out of bounds. Sunderland was credited with having possession of the ball on the field, and a replay upheld that call.

Following Buechele’s fourth interception of the season, Oklahoma put together a 13-play touchdown drive that lasted 6:27.

Texas forced four turnovers, but the Longhorns may have been done in by the fumble they didn’t recover. Facing a 3rd-and-5 at the Texas 39 with 1:10 to go, Mayfield fumbled on a bootleg. Oklahoma lineman Bobby Evans, however, was able to fall on the football at the 46, and Austin Seibert then punted to the Texas 10 with 17 seconds left.

Mayfield’s fumble wasn’t the only missed opportunity for the Texas defense in the fourth quarter. Oklahoma converted three third-down conversions on its second-to-last drive, and the only third-down failure featured Mayfield recovering a fumbled exchange with Mixon. The next play, Oklahoma took a 45-34 lead as Seibert kicked a 39-yard field goal with 2:36 to go.

This time, no issues with Texas special teams, extra-point kicks

Swimming in Texas ‘cesspool’ is only getting harder for Charlie Strong