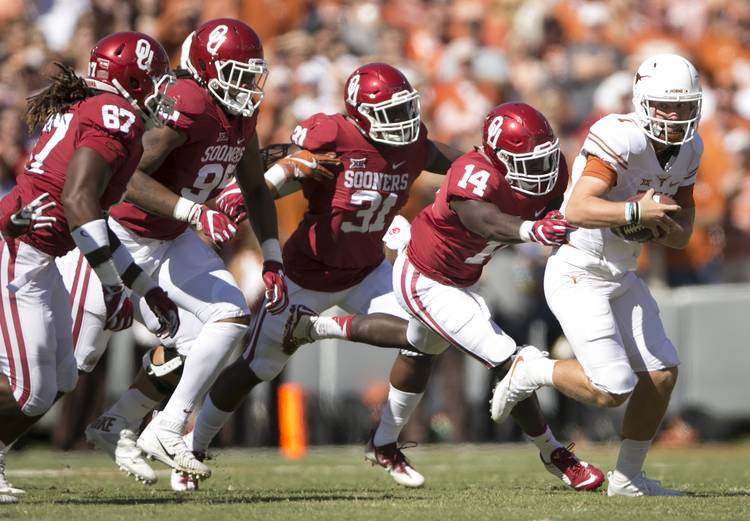 DALLAS — To hear ESPN’s Kirk Herbstreit tell it, Texas officials should do us all a favor and just shut down this toxic mess. Call the Centers for Disease Control. Such is “the cesspool of being in Austin, Texas.”

“Who would want the job at Texas to be the head coach?”

Plenty of coaches would gladly jump in this “cesspool.” Some would do cannonballs. For $5 million, you can buy nose plugs.

Of course, it’s easy to rip the Longhorns (2-3, 0-2 Big 12) while broadcasting from College Station with a crowd of Aggies behind you. But Herbstreit’s comments were a correct portrayal of the win-now-or-else attitude permeating college football. It’s not just in Austin; it’s everywhere.

Strong knows his product is unacceptable. He’s 13-17 in his two-plus seasons, and many believe he must win probably six of his remaining seven games to remain at UT. Next is a home date with Iowa State, a team that thumped Texas 24-0 last season in Ames.

Left tackle Connor Williams said the coaching staff is getting unfairly blamed for the team’s inconsistency.

“We’ve seen what they call can make us score,” Williams said. “We’ve shown that teams can’t stop us unless we stop ourselves with penalties and messed-up plays. … It’s so frustrating, because we’re almost there. We’re that close to it. We just need a couple more plays.”

Against OU, some things finally went Strong’s way, and it still wasn’t enough. The Longhorns finally snagged two interceptions and generated four turnovers all together. But the offense converted those into just three points.

The Texas secondary actually held up well in the first half all things considered. Mayfield’s 71-yard strike to Dede Westbrook was OU’s longest scoring pass play in series history. After the break, Mayfield found Westbrook again slicing through the open field for two touchdowns (42 and 47 yards).

Westbrook finished with 10 catches for 232 yards, five shy of the UT record for most yards ever allowed to an opposing receiver. OU running back Samaje Perine also ran for 214 yards on a career-high 35 carries.

“Look at us on defense, we can’t give up the big plays, especially the bombs we got thrown up over our head,” Strong said. Going into the Cotton Bowl, Strong had taken over the defensive play-calling duties and demoted defensive coordinator Vance Bedford.

Mayfield was sacked six times last year. This time, he went down only once, a 7-yard sack on third-and-5 late where he fumbled but recovered just in the nick of time.

“It’s special to me. I grew up in Austin so I know what this rivalry is all about,” said Mayfield, the pride of Lake Travis. “I’ve been waiting a long time to finally get a win against these guys.”

What got overlooked was the Texas special teams. Strong promised to fix the blocking protection on the extra-point attempts, and he did. Kicker Trent Domingue was 4 for 4 on extra points and even drove home two field goals.

The OU game appears to be an accurate sampling of what this season has become.

Hold your breath on special teams.

“Charlie Strong didn’t get to his office for his first day before Red McCombs said this isn’t the right guy for our job,” Herbstreit said. “He was set up to fail at Texas.”

Texas gives its coaches plenty of flotation devices. Whether you swim or sink in this cesspool is up to you.