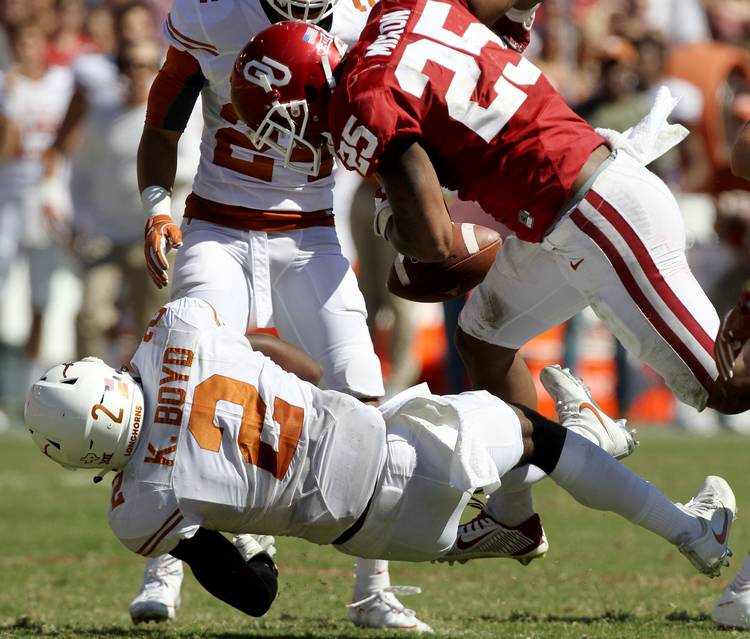 DALLAS — There was some good news Saturday from Texas’ perspective. The Longhorns stopped all 11 Sooners from blocking any extra points.

Texas actually had a decent day on special teams during a 45-40 loss to No. 20 Oklahoma.

Deep snapper Jak Holbrook had no issues, and kicker Trent Domingue went 4 for 4 on extra points. While that’s normally not news, this comes one week after Texas had three extra-point attempts blocked at Oklahoma State.

Domingue also drilled field goals from 33 and 28 yards. OU’s Austin Seibert missed a 49-yard field goal in the first quarter, but his 39-yard attempted banged off the right upright and clinched the win with 2:36 remaining.

The Longhorns also benefitted from a critical mistake by OU’s Joe Mixon. The running back who doubles as a returner muffed a punt at the OU 23 in the third quarter. Texas pounced on the live ball and took over in excellent field position, however quarterback Shane Buechele threw an interception three plays later.

One of the most notable changes came on kickoff returns. Instead of UT freshman Devin Duvernay returning kicks, the Longhorns rotated others. Armanti Foreman had two returns, including one for a season-long 33 yards. Brandon Jones took back a kickoff 21 yards, and Quincy Vasser had one for 11 yards.

No. 4 Texas extended to five sets, but outlasts Iowa State