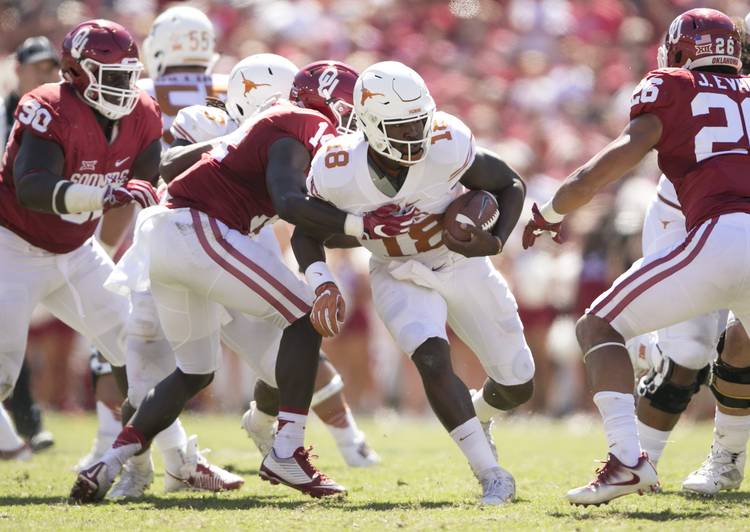 The 18-Wheeler may soon take to the air.

When asked Monday whether Texas needed the threat of throwing out of the 18-Wheeler package to maintain its effectiveness, head coach Charlie Strong said some alterations could be made to the short-yardage set, which features quarterback Tyrone Swoopes as a run-first option. Swoopes was coy when asked about changes to the playbook, but a lackluster showing against Oklahoma led to questions about whether opposing defenses had caught on.

Swoopes entered this past weekend averaging 4.1 yards per carry, but was limited to seven yards and four rushing attempts in the 45-40 loss. Swoopes picked up 64 yards and two touchdowns over the 15 attempts he logged during Texas’ 2014 and 2015 Oklahoma games.

“When I go in, you pretty much know what’s going to happen,” said Swoopes, who ran for five touchdowns against Notre Dame and Oklahoma State. “I don’t think they did anything different.”

Swoopes said that running plays are mostly run out of the 18-Wheeler package during practice, and that he does not have the authority to call audibles in Sterlin Gilbert’s offense. Swoopes did not attempt a pass in Texas’ losses to Oklahoma State or Oklahoma, and five of his eight attempts this season came while Shane Buechele was sidelined by a rib injury against Cal.

Swoopes has completed 56.4 percent of his 498 attempts during his four-year career, and he ranks 13th on the Longhorns’ all-time list in passing yards (3,038).  Wide receiver Dorian Leonard said Monday that he has confidence in Swoopes as a passer.

“Whenever they do decide to put it in, we know it’s going to be clicking just like it always has been,” Leonard said.

Swimming in Texas ‘cesspool’ is only getting harder for Charlie Strong

Texas returns to Royal-Memorial Stadium on Saturday; will the fans be back, too?