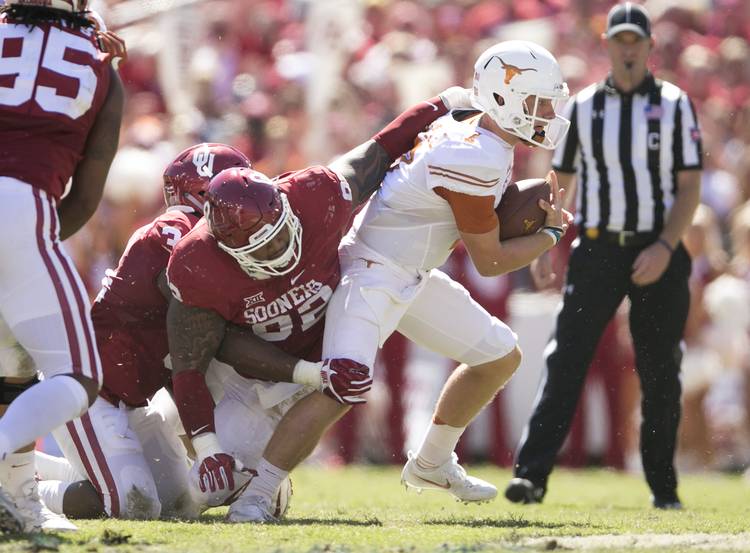 The cruel irony is hard to ignore.

Texas coach Charlie Strong muddled through his first two years with a frustrating offense. He fixed that by hiring Sterlin Gilbert, implemented the spread and now the Longhorns are averaging 41 points per game, one of the highest totals in school history.

Texas (2-3, 0-2 Big 12) has undergone an offensive renaissance, and yet Strong can’t enjoy it because the Horns are also on pace to allow the most points in school history.

“If you don’t have this type of offense,” Strong said Monday, “you’re not going to be able to stay in the game.”

The Longhorns are one of the most balanced teams in the nation. Texas averages 244.8 yards on the ground and 254 through the air. Overall, the offense ranks 20th nationally in total yardage. Last season, the Horns ranked 92nd.

The grim reality is that if the Longhorns can’t score 40 points or more each week, they’re probably not going to be in many Big 12 games. The average Big 12 team scores 37.5 points, the highest average of any Power 5 conference.

“What happened was when people saw what Baylor and TCU were doing with lesser athletes, then boom, everybody else jumped on board,” Strong said. “It’s kind of taken off in this league.”

In print, Baylor and TCU fans can read that as a slight. That’s not what Strong intended, though. It’s true the Bears and Horned Frogs found offensive nirvana by going to the spread-’em-out style and letting talented play-makers work in space. The Horns were the ones late to the party.

OK, so maybe Strong had to post an 11-14 record his first two seasons before realizing a change was necessary. But now the Horns have the firepower to compete every week.

Running back D’Onta Foreman has been tearing through defenses and would typically be running for mayor by now. He ranks second nationally averaging 148.8 yards per game and could become UT’s first 1,000-yard rusher since 2007.

Buechele is quietly rewriting the UT freshman record book. With seven games remaining, he already owns the freshman record for passing yards (1,204) and touchdowns (11). He should break Bobby Layne’s record of five wins as a freshman starter, a mark set in 1944.

“However many they score, we need to score one more,” Buechele said. “That’s our mentality.”

Texas has already connected for seven passing plays of 40 or more yards this season. In last week’s 45-40 loss to Oklahoma, Buechele hit Devin Duvernay for a 63-yard touchdown and Dorian Leonard for a 45-yard score.

But every defensive miscue only magnifies the burden that UT’s porous defense is putting on the offense.

Buechele missed Collin Johnson on a slant route that would have resulted in a touchdown. He and John Burt couldn’t connect on a deep ball down the middle that would have been another score.

“Bad throws, bad execution on my part,” said Buechele, who also threw an interception at OU’s 7-yard line trying to find Armanti Foreman. “Great routes, great play-calls by coach and the players, but you have to execute on my end.”

It ultimately didn’t affect the outcome, but Buechele threw too high trying to reach Leonard on a late 2-point conversion try.

The Horns did collect a field goal after the Johnson miss on third-and-13 from the OU 16. But that’s a lot of points still lying around the Cotton Bowl.

“The more you think about something like that, the less your mind is focused on the game,” Buechele said. “So you have to look to the next play, put it behind you and just move forward.”

The offense also hasn’t been consistent throughout all four quarters. Texas scored 43 points against California, but only 10 in the second half. The offense put up 31 against Oklahoma State, but only six after the break.

Against the Sooners, the Horns scored 27 points in the third and fourth quarters, as the game morphed into a shootout, and finished with 40. But OU scored 45.

And therein lies the rub. Texas is scoring, and the offense can get better. But the pressure to score a bunch must haunt the offensive coaching staff.

“It’s sure reassuring from last year that we’re scoring more points,” left tackle Connor Williams said. “It helps us think that we’re doing something right, but then again, we’re still losing. There’s plenty of room for us to get better where we can actually score enough.”

Texas returns to Royal-Memorial Stadium on Saturday; will the fans be back, too?

Staff takeaways: Longhorns will need to create own energy against Iowa State