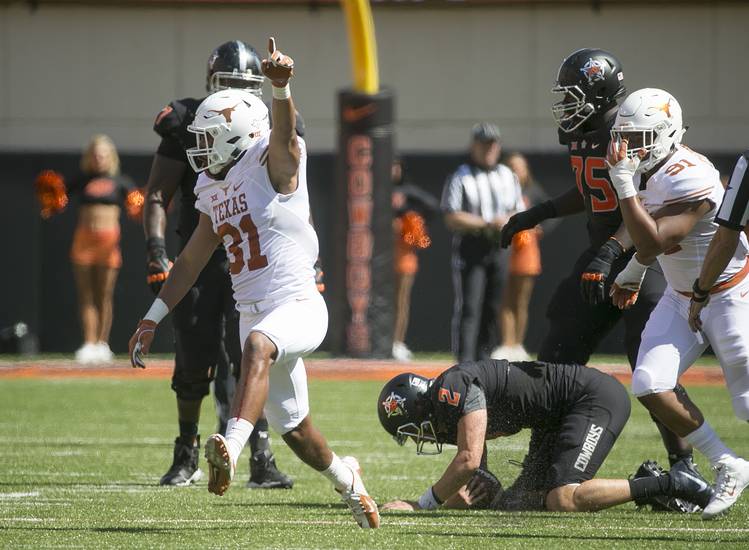 What is Jason Hall?

Is he a safety? After all, the junior from Grand Prairie is listed as the starting free safety on Texas’ depth chart. Or, as was suggested on Monday, does he prefer to moonlight as a linebacker?

“I’m not sure, to be honest,” Hall said. “Coaches tell me what to do, and I just try to play to the best of my ability.”

Whatever he is, Hall will need to be a repairman for a secondary that has yielded a 390-yard passer and a 100-yard receiver in each of its last three games. At 297.8 yards per game, Texas ranks 120th among 128 schools nationally in passing defense. (The Longhorns are 115th in total defense).

On Monday, fellow safety Dylan Haines argued that cornerbacks have the toughest job on defense since “you have to have such a short memory at corner. If you mess up playing D-tackle or linebacker, it’s 5, 10 yards maybe, or maybe it goes unnoticed. If you mess up playing that (corner) position, it’s 80 yards, it’s a touchdown and the band starts playing.”

Hall, who’s 6-3 and 216 pounds, has 127 tackles, seven pass deflections and two interceptions in his Texas career. He’s started 22 games, which could be considered a value since he was a three-star recruit coming out of South Grand Prairie.

Hall’s first start came in the fourth game of the 2014 season, and a few weeks later the then-freshman served notice with a de-cleating takedown of Oklahoma running back Samaje Perine. But the lack of highlights that followed, though, led to public criticism from then-defensive coordinator Vance Bedford and fans who wondered whether Hall was a one-hit wonder.

Hall started 11 games last year, and started the first three games of this season. But after accumulating only 11 tackles — and being the last defender to see Cal’s Chad Hansen before he scored the game-winning touchdown in the Golden Bears’ 50-43 win three weeks ago — Hall lost his starting spot to freshman Brandon Jones.

But after Texas gave up two first-quarter touchdown drives at Oklahoma State, Hall re-entered the defensive backfield alongside Haines. Texas ended up losing 49-31, but Hall, while rotating snaps, led the Longhorns with eight tackles and two sacks.

“To settle guys down, you put your two veterans back in there,” Bedford said after the game. “You saw one time Jason Hall came off the edge, ran over a back and sacked the quarterback. That’s what those guys can do. They calm guys down.”

Hall earned the start in last week’s loss to Oklahoma, and he’s slated to start again this week against Iowa State. Texas forced a season-high four turnovers against the Sooners, but the Longhorns also surrendered touchdown passes of 42, 47 and 71 yards.

This week, the Longhorns will face an Iowa State offense that’s averaging 249.7 passing yards per game.

“We’ve got to go back to our fundamentals, and that’s starting with practice,” Hall said. “Pay attention to details, make sure we’re reading our keys and all of us doing our jobs and holding each other accountable.”

Staff takeaways: Longhorns will need to create own energy against Iowa State