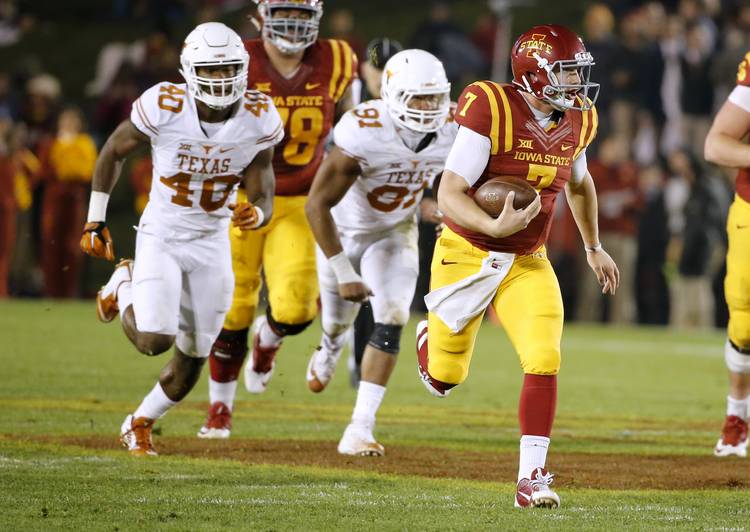 Quarterback Joel Lanning #7 of the Iowa State Cyclones breaks away from defensive end Naashon Hughes #40, and defensive end Bryce Cottrell #91 of the Texas Longhorns while rushing for yards in the first half of play at Jack Trice Stadium on October 31, 2015 in Ames, Iowa. (Photo by David Purdy/Getty Images)

Brian Davis: How will the fans react?

Texas players are glad to be back home this week, but it’s doubtful that the Texas-Iowa State atmosphere at Royal-Memorial Stadium will be anything like it was in the season opener against Notre Dame. It may not even be as loud as UTEP. With all due respect, it’s Iowa State. This is one of those games where the Longhorns better create some of their own energy and momentum early. Charlie Strong said Iowa State is due for a big win after having come so close in recent weeks. The Cyclones will be fired up after whipping the Horns 24-0 last year in Ames. There’s no reason to think they won’t come to Austin ready to do it again.

Baylor, West Virginia and TCU await on Texas’ home schedule, but Iowa State is the game that fans need to look forward to. The Longhorns have won both their games at Royal-Memorial Stadium, and a win over the Cyclones could stop the bleeding that was opened in California and then bled into Stillwater and Dallas. Texas has been scoring at home and on the road, so that cannon won’t be silent Saturday. Will the home-field advantage mean something for the Texas defense, though?

There was a certain malaise over the entire setting at Monday’s press conference because Charlie Strong has very little new to offer as for solutions for his 2-3 team that’s lost three games in a row. He even said the double-overtime win over Notre Dame in the season opener “feels like three years ago.” Players seemed down in the mouth as well, and it’s hard to blame them. Defensive tackle Chris Nelson mentioned there was a scheduled defensive players-only meeting Monday afternoon for that side of the ball to clear the air and discuss how to correct what’s been going wrong.

Cedric Golden: Strong has his supporters

I hate to see Charlie Strong going through this. He’s easily one of the most likable coaches I’ve ever been around in 20-plus years in the business, but being likable isn’t always enough, especially when expectations are always high. I hope he figures this thing out and gets the Longhorns back on track because it’s certainly getting late in the game with contests still remaining against Baylor, TCU and Texas Tech. Contrary to what you may have seen on ESPN GameDay, most media members and supporters of the program that I know are very fond of Charlie. Austin is far from a cesspool. Not sure what Kirk Herbstreit was thinking. Dude was way off.

Texas offense is surging, and yet 41 points a game is still not enough