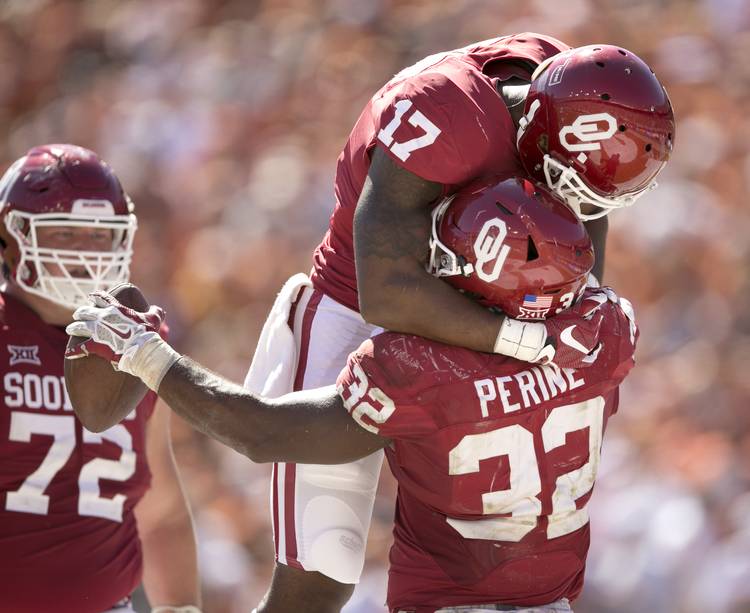 OU wide receiver Jordan Smallwood celebrates a touchdown by running back Samaje Perine in the second half at the Cotton Bowl in Dallas Saturday October 8, 2016. JAY JANNER / AMERICAN-STATESMAN

Two is the number worn on the jerseys of Texas cornerback Kris Boyd and wide receiver Devin Duvernay. Freshman Brandon Jones has blocked two punts this season, while senior Dylan Haines has intercepted two passes. Former Texas defensive back Aaron Ross, who will be inducted into the Men’s Hall of Honor on Friday, played Iowa State twice as a Longhorn, and he broke up a school-record six passes in his second meeting.

Two also accounts for the number of red-zone stops that have been made by the Texas defense.

Opposing offenses have made 18 trips to the Texas 20 this season, and only twice have those red-zone appearances not resulted in points. Cal ran out the clock after it got to the Texas 1 in the waning seconds of its 50-43 win. Notre Dame had a field-goal attempt blocked after it reached the Texas 15.

“We know we haven’t been our best,” Texas defensive tackle Chris Nelson said. “We always have room to improve, and that’s what we’re going back and looking at now.”

As of Thursday, Texas ranked in a tie for 87th nationally with TCU, Miami, Hawaii and Florida International with its .889 lack-of-success rate (first-place Ohio State has prevented scores on five of its 12 stands in the red zone). Texas has yielded 12 touchdowns over those 18 red-zone stands, while opponents have kicked four field goals.

“In the red zone, you can’t run downfield, so you’d expect us to be able to hold teams to field goals and try and take four points off the board then they get in the red zone, but for some reason we’re not doing that,” Haines said. “The other teams are always able to hold us to a field goal, but we just can’t get it done.”

While a turnover or a failed fourth-down try would be the most ideal outcomes in the red zone, Haines said that “in this conference, holding them to a field goal attempt is a victory.” Forcing field-goal attempts means third-down stops, though, and Texas has failed to do that on five of the aforementioned touchdown drives.

“When you get to third down, you have to get off the field. We have to make a play,” head coach Charlie Strong said. “It’s mistakes that were made, but they were very correctable.”

On Saturday, Texas will confront an Iowa State team that’s scoring 26.7 points per game. Iowa State is one of the four schools in the country (Georgia State, Kansas State and Florida Atlantic) that have converted each of its red zone opportunities this season. The Cyclones have turned their 18 trips to the red zone into 14 touchdowns and four field goals.

“Each person has got to do their assignment and make sure they execute,” safety Jason Hall said. “(We need to) hold each other accountable and be able to trust each other that we’ll do our jobs.”

Betting the Horns: So far, Texas has been solid against the line