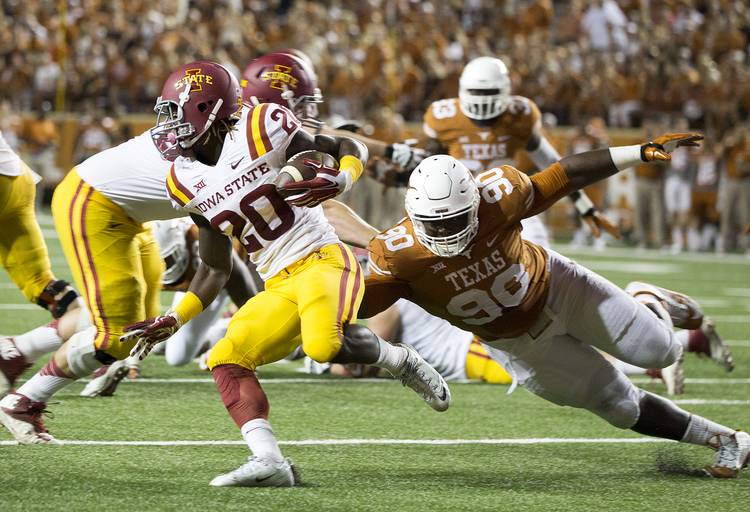 On the surface, Iowa State at Texas looks like a dog. It’s two losing teams unlikely to factor into the Big 12 race, except as a spoiler.

From a betting perspective, Iowa State at Texas pairs two of only three Big 12 teams with a winning record against the point spread.

The Cyclones are 4-2 ATS and 4-0 over the last month. The Longhorns are 3-2 vs. the line, having easily covered the 11½-point spread against Oklahoma.

Texas Tech is the only other team in the Big 12 making money for investors, leading the way at 4-1 ATS. Overall, the Big 12 is 22-29 vs. the line, the worst record among Power Five conferences.

It’s tempting to hop on Iowa State (+14 points) this week because this is an improving team facing a disappointing one.

Reality check: The Cyclones are 1-5. They also could be emotionally spent, having coughed up fourth-quarter leads each of the last two weeks against Baylor and Oklahoma State. Seasons go in cycles, and this looks like a flat spot on the schedule for the Clones.

The Longhorns are going to score on everyone, and their rancid defense won’t be eviscerated by the Cyclones, who lack speed and a star quarterback. The Horns have faced only one other team with similar QB play, and they drilled UTEP 41-7.

The pick: Texas 42, Iowa State 24. The Longhorns play much better at home, 6-1 ATS in their last seven. This looks like the spot where the defense finally shows signs of life. It’ll be temporary relief. Much better opposing offenses and QBs are coming down the road.

Big 12 look: Texas Tech (+1) over West Virginia. The Red Raiders are a completely different bunch at home, averaging 60 points and 660 yards over the last two-plus years. … Kansas State (+14) over Oklahoma: The Wildcats are sneaky good. Not buying into the Sooners, only 1-4 ATS. … Baylor (-35) over Kansas: The Jayhawks sniffed victory last week. It’ll be snuffed out quickly this week.

And then … There was one. Believe it or not, of 128 FBS teams, only one — ONE — remains unbeaten vs. the line. Take a bow, Colorado. The Buffaloes, 4-2 overall, are 6-0 against the spread. Streaks are made to be broken, so beware of CU (-13) over Arizona State on Saturday.