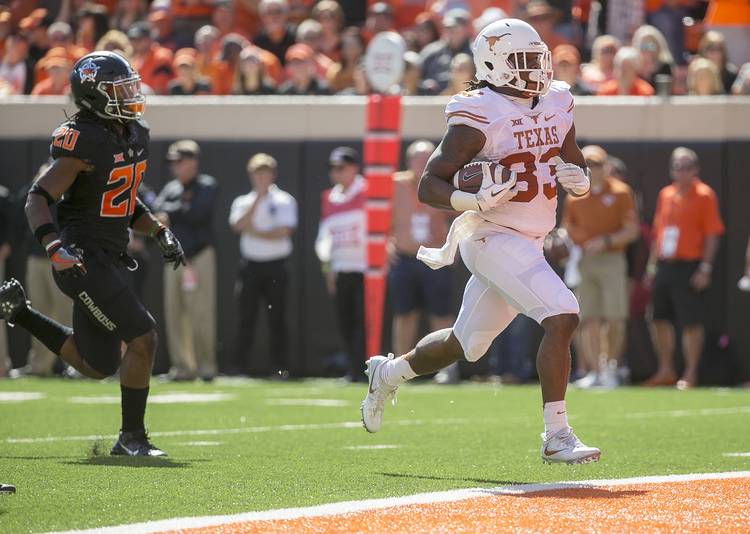 Texas running back D'Onta Foreman runs in for a touchdown ahead of Oklahoma State's Jordan Burton during the second quarter at Boone Pickens Stadium in Stillwater, Okla., on Saturday, October 1, 2016. DEBORAH CANNON / AMERICAN STATESMAN

Five games in, and this election’s already over. D’Onta Foreman is Texas’ most valuable player.

The running back from Texas City has all the characteristics of something special. He powers through holes smaller than the space needed for that apostrophe. He accelerates in the open field and fights for just about everything.

“I don’t know if he’s mad or not,” twin brother Armanti Foreman said. “I think that’s just the way he plays.”

Foreman ranks second nationally with 148.8 rushing yards per game, and that’s with him missing the UTEP victory due to injury. He’s posted six consecutive 100-yard games going back to last season. “He runs with everything he has,” left tackle Connor Williams said. “That’s the type of person you want to block for.”

The Cyclones (1-5, 0-3 Big 12) have the worst run defense in the league. They’re allowing 235.5 rushing yards per game, which ranks 115th nationally. The Longhorns (2-3, 0-2) are practically in must-win mode in hopes of cooling Charlie Strong’s scorched seat. It’s the type of matchup where Foreman should shine.

Speaking of numbers, this statistic was jaw-dropping upon first inspection. Foreman has averaged 6.8 yards per carry in his two-plus seasons with the Longhorns. It’s 6.848, to be exact. That’s better than the career averages of Heisman winners Ricky Williams (6.2) and Earl Campbell (5.8). Better than Cedric Benson (5.0) and Jamaal Charles (6.2).

In fact, it’s fractionally better than Vince Young, who holds the school record with a career 6.842 yards-per-rushing attempt.

Campbell, Williams, Benson and even Charles all played in different eras, long before anyone truly realized the damage spread offenses could do. Young was in another athletic stratosphere.

Running backs coach Anthony Johnson made a highlight tape of all the talented runners that have passed through Moncrief. There’s no reason to believe Foreman can’t be one of them.

“He played it again right before the season started, and he let us know that we’re chasing ghosts here,” Foreman said. “There’s been many great players that came through here. You want to be in the talk with those guys. It’s nice, but I don’t worry about it. I just do what I came here to do.”

It’s now well documented how Foreman carries a chip on his shoulder. Several teams, including Texas, offered Armanti a scholarship before offering D’Onta. It served as a wake-up call for D’Onta to study harder. Once he got a better test score, the scholarship offers came pouring in.

“I keep it with me, because I feel like I’m underrated at times,” Foreman said. “Every time I step out on the field, I want to make a statement to everybody. It helps our team. It works for me and the team.”

It’s fantastic motivation, no doubt, and earlier this season Foreman joked he should “get a tattoo” of that chip on his shoulder. Most of the real estate on Foreman’s back is taken up with a tattoo of D’Onta and Armanti celebrating his 81-yard run against OU in 2015.

“All the greats have an edge about them,” said Johnson, who played with Benson and Young during his college career at UT. “Whatever it is, you’ve got to revert back to that and it will carry you through. So no, I don’t want him to lose that edge at all. Not at all.”

The reality is Foreman probably doesn’t have much time left at Texas.

Only a junior, Foreman will face a tremendous decision after the season to stay or jump into the NFL draft. On Friday, Bleacher Report called Foreman the biggest running back sleeper in the 2017 draft class. That’s certainly jumping ahead.

Foreman tracks other draft-eligible running backs, like LSU’s Leonard Fournette and Oklahoma’s Samaje Perine. Some NFL general managers believe you can grab running backs in the middle rounds, long after first-round money is gone. So while it’s likely Foreman leaves, it’s not a slam-dunk decision.

Asked about the his future, Foreman said, “I don’t think about the NFL or nothing like that. I’m here right now, and I want to get this program back in the right direction.”

Every team wants the perfect blend of power and speed in the NFL draft. Enter the biggest RB sleeper of 2017, D'Onta Foreman pic.twitter.com/XaAIf7SzzI

Running backs have a certain shelf life, and Foreman has already been banged up a little. He suffered a hand injury last season and was held out against UTEP as a precaution. He went down against Oklahoma State with an abdominal injury, but played through the pain against Oklahoma.

He still  had 159 yards on 25 carries and two touchdowns against the Sooners.

“That’s why you ride with a guy like that,” offensive coordinator Sterlin Gilbert said. “He’s a battler. He was not 100 percent healthy, and the kid went out there and was determined.”

An angry, hard-charging determined battler. That’s an apt description, all right. That’s what you’d expect from the team MVP, too.

“I just go out there and play hard,” Foreman said. “I do what I’m asked to do and just lead. I feel like I’ve been doing that, but I’ve got to continue to get better each and every day.”

The Eyes of Texas: Three Cyclones the Horns will be watching