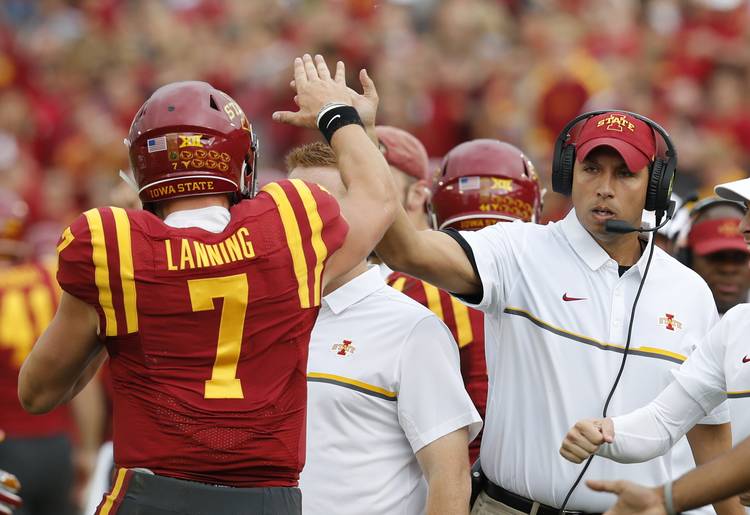 Each week, the American-Statesman will interview the beat writer of Texas’ opponent. This week, the Des Moines Register’s Tommy Birch offers insight on Iowa State. You can find Tommy on Twitter at @TommyBirch.

Has last year’s 24-0 win given the Cyclones a confidence boost ahead of this trip to Austin?

It hasn’t hurt, but that win seems like so long ago. Iowa State has almost an entirely new coaching staff and went through basically a roster overhaul. The win last year probably gives quarterback Joel Lanning the most confidence. It was a breakout performance for him, and up until the Baylor game this season it was his best game in an Iowa State uniform. Last year’s Texas game was his first collegiate start. Lanning has shared snaps, but hasn’t given up the starting job since.

Even though they’re 1-5, what noticeable strides have the Cyclones made under new coach Matt Campbell?

The biggest strides might be on the offensive side of the ball, where the Cyclones struggled through the first three games of the season and are now in the midst of their best three-game stretch since 2005. The offensive line has gotten noticeably better, Lanning has shown stretches of improvement, and running back Mike Warren is showing signs of himself from a season ago where he rushed for 1,339 yards. Iowa State has also used a quarterback rotation which has brought mixed results from backup Jacob Park. Lanning, meanwhile, has played great the last three games.

What was the Achilles’ heel for Iowa State in its close losses to Baylor and Oklahoma State?

Lack of depth and confidence have been the killers for Iowa State. The Cyclones went into the fourth quarter of both games with the lead, but failed to close them out. After tons of roster changes in the offseason, Iowa State is relying on tons of young players, a limited roster, and a group of players that haven’t experienced much success. Their lack of ability to close out games in the past may be hurting their confidence this season.

Texas has struggled against wide receivers over its three-game losing streak, so what do Longhorns fans need to know about Allen Lazard?

He’s Lanning’s go-to guy. The lengthy wide receiver has been Lanning’s security blanket at times. Lazard is often the first option Lanning will look to, and even if he’s not open, he’ll heave it to him. That’s rarely been a problem. Lazard has used his length to leap up and grab jumpballs. And the ones he hasn’t gotten, he’s often drawn pass interference flags for. Lazard has been dinged up this season, but said he’s 100 percent healthy now.

Name one Iowa State player that Texas fans aren’t talking about — but should be.

Trever Ryen is still somehow flying under the radar. The wide receiver has caught 24 passes for 283 yards and two touchdowns. He’s also been used as a running back in the past. But Ryen does most of his damage on special teams, where he began the week ranked fifth nationally in punt return average with 16.3 yards per game.

Restaurant? What’s the best bar? Anyone got some recommendations? Hit me up on Twitter. And if you’re willing to buy me a drink in the process, well, I suppose that wouldn’t be a bad thing, either. I did do a quick search of some places and a Home Slice Pizza caught my eye.