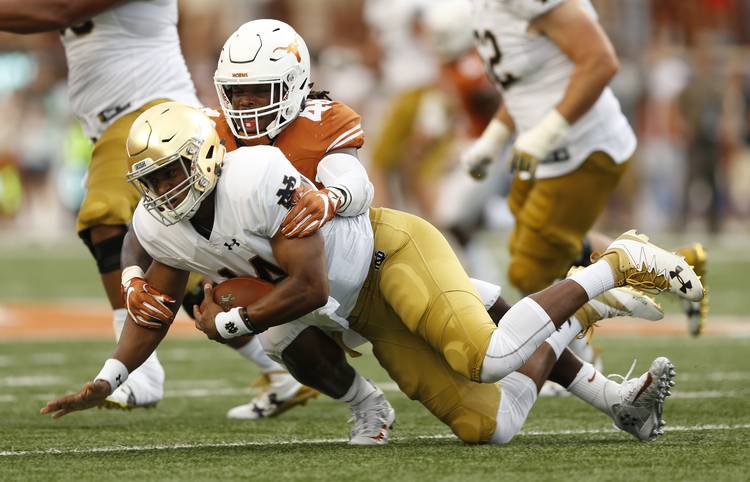 Texas has had at least three sacks in four of its five games, but last week’s lone takedown of Baker Mayfield was more of a mistake by the Oklahoma quarterback. Texas’ 15 sacks have been split between 10 players, and five Longhorns have two sacks. On Saturday, the Texas sack attack will face an Iowa State team that’s allowed 19 sacks, seven of which came in last week’s loss to Oklahoma State.

Allen Lazard vs. the Texas secondary

The good news for Texas is that senior safety Dylan Haines recorded the first two interceptions of the season in last week’s loss to Oklahoma. The bad news is that the Longhorns have yielded 100-yard performances to receivers Chad Hansen, Jalen McCleskey and Dede Westbrook over the past month. Lazard has two 100-yard games this season, and the junior is averaging 14.2 yards per reception.

D’Onta Foreman can’t be 100 percent of the running game, can he? With Chris Warren III out, Texas needs someone to emerge as the No. 2 option behind the Big 12’s leading rusher. Freshmen Kyle Porter, Tristian Houston and Lil’Jordan Humphrey have all seen their share of speculation. Awaiting on Iowa State’s defense will be linebackers Willie Harvey and Brian Mills, who have combined for 9.5 tackles behind the line of scrimmage.

Iowa State ranks ninth in the Big 12 with its 26.7 points per game, but the Cyclones have been unstoppable once they reach an opponent’s 20-yard-line. Iowa State is 18 of 18 on its red zone attempts, and those opportunities have resulted in 14 touchdowns and four field goals. Texas’ best bet may be to just keep Iowa State out of the red zone; the Longhorns are ranked 87th in the nation in red zone defense.