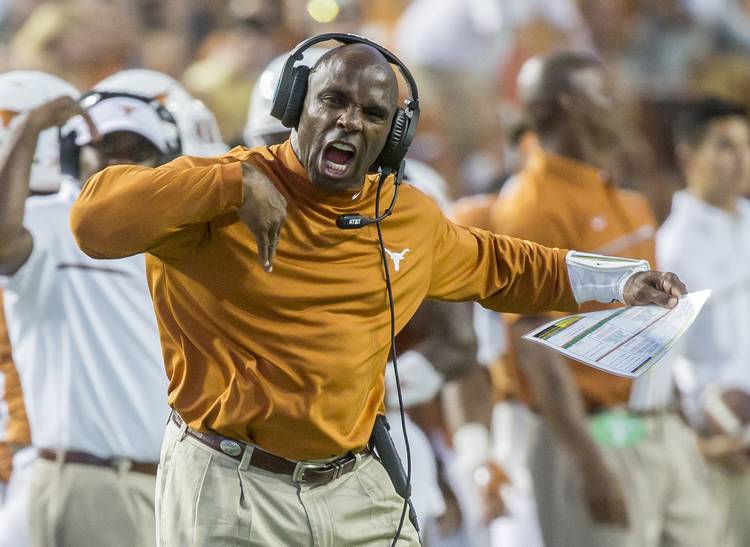 WHY TEXAS (3-3, 1-2) WON: Because the Longhorns are a second-half team. Or at least they were Saturday night. Because D’Onta Foreman continues to run with authority, producing his seventh straight 100-yard game that he’s played in going back to last year’s West Virginia game. Because that dominant third quarter set up that time-chewing fourth quarter. Because the defense finally had a good week. And, perhaps, because this was a win that Texas just really, really needed.

WHY IOWA STATE (1-6, 0-4) LOST: Iowa State’s Big Three on offense (quarterback Joel Lanning, running back Mike Warren and wide receiver Allen Lazard) were held in check. Texas was probably due for a big defensive performance, and the Cyclones were stuffed — averaging 2.3 yards per carry, managing only two field goals, yielding eight sacks, while not getting a single sack themselves. The Cyclones needed 10, not two, field goals from Cole Netten, whose school-record string of 15 consecutive field goals made ended with a missed 50-yarder on the final play of the first half.

THE EYES OF TEXAS: … were on three specific Cyclones — Lazard, Iowa State’s leader in catches, receiving yards and touchdown catches; Warren, who had 30 carries for 130 yards and two touchdowns against Baylor two weeks ago; and wide receiver/returner Trever Ryen, one of the nation’s top punt returners coming off his best game of the season against Oklahoma State.

Lazard had seven catches for 65 yards, including a 30-yard play.

Ryen was injured in the first quarter and did not return. He finished with no catches and no returns.

Offense: Devin Duvernay. Four catches for 96 yards and a 75-yard touchdown. He has two of Texas’ three longest scoring receptions of the season.

Defense: Chris Nelson. The defensive player of the week after the Notre Dame game was big again Saturday night — a team-high seven tackles, 1.5 sacks, 2.5 tackles for loss and a forced fumble.

(1) Shane Buechele turned things around in the second half; after an 8-of-15, 66-yard effort in the first and second quarters, the freshman threw for 196 yards and a pair of touchdowns in the third. He finished 4 yards shy of the 300-yard mark.

(3) Milestone moments: Naashon Hughes’ 2.5 sacks were a career high. So were Dorian Leonard’s five catches. Buechele tied David Ash for second place in the most starts for a UT freshman (six) and should pass the great Bobby Layne for the top spot at Texas Tech on Nov. 5.

ON DECK: AT KANSAS STATE (11 a.m. Saturday, TV TBA): Texas hasn’t won in Manhattan since 2002. In fact, the Longhorns are 1-6 all-time there. The Wildcats lost to Oklahoma earlier today. After this road trip, Texas gets Baylor at home, travels to Texas Tech and then hosts resurgent West Virginia before wrapping up the regular season against Kansas and TCU. The Longhorns are .500 on the season with six games to go.

Texas 27, Iowa State 6: Longhorns back at home, back in the win column