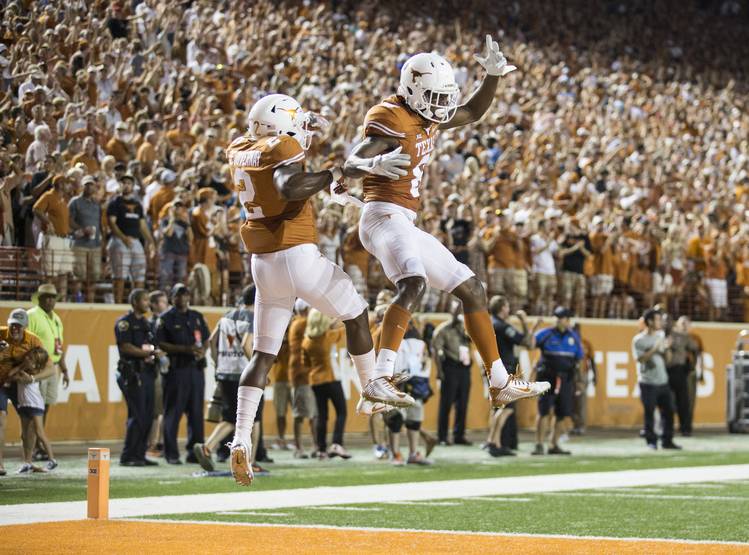 For 15 minutes Saturday night, the Texas offense was close to perfect.

Texas came alive in the third quarter of its 27-6 win over Iowa State. Trailing 6-3 at halftime, the Longhorns snapped a three-game losing streak by scoring three touchdowns in its three third-quarter possessions.

“Early on in the season, we struggled at putting up points in the second half,” freshman wide receiver Devin Duvernay said. “That’s been a big focus since then, just playing a complete game and trying to pick up things in the second half.”

In the first half, Texas was held to only a field goal by an Iowa State defense that had allowed 83 points in its last two games. Going back to last year’s shutout loss in Ames, Texas’ offense had accumulated 365 yards but only three points in the last six quarters against the Cyclones.

Saturday night, Texas ran 37 plays for 161 yards and the field goal in the first half. Then, over 15 minutes of the third quarter, the Longhorns ran 25 plays for 243 yards and 21 points.

“We haven’t been playing as well as we’ve wanted to play,” said running back D’Onta Foreman, who scored on an 18-yard run in the third quarter. “I think we came out — actually, when we came in the locker room, it was kind of dead, so we had to get everybody’s juices flowing.”

Shane Buechele threw 37- and 75-yard touchdown passes to Jerrod Heard and Devin Duvernay. Foreman’s 18-yard score put him over the 100-yard mark for the game and capped a 13-play drive that began at Texas’ own 4-yard line.

Texas head coach Charlie Strong insisted his demeanor didn’t change at halftime. “I usually yell a lot — halftime, first quarter, second quarter. I don’t give too many breaks,” he said.

In the offensive huddles, though, the message was clear: Quit making mistakes. Foreman lost a fumble that led to Iowa State’s second field goal, and one of Texas’ two offensive pass interference penalties killed a first-quarter drive that had reached Iowa State’s 28.

But the referees didn’t keep their flags in their pockets after halftime. Texas’ first strike in the third quarter was actually a 37-yard touchdown pass to Armanti Foreman that was called back when both Foreman and Iowa State’s Mike Johnson were penalized for face masks on each other.

On the next play, Buechele found a wide-open Heard for the 10-6 lead.

“It was great for our offense to go ahead and take that shot and execute on that play,” said Buechele, who was 13 of 15 for 196 yards in the third quarter.

How open was Heard on that touchdown catch?

“(I was) close to scary wide-open,” said Heard, who was the starting quarterback in last year’s shutout loss in Ames. “It’s one of those things where you’re so wide open, now you start thinking, ‘Don’t drop the ball, don’t drop the ball.’ Shane had put it on me. It was a great ball, and all I had to do was reel it in for the touchdown.”

While Texas propelled itself to victory with that third quarter performance, the Longhorns were still held to only three points in the fourth. Still, Texas has scored in every quarter of a game three times this season. Heard said the offense showed its potential in the third quarter.

“We showed that we could be a first-quarter team, or a full four quarters, or we show up in the second half,” Heard said. “When we really click, (opponents will) notice us as a more dangerous team than we really are right now.”

Texas 27, Iowa State 6: Longhorns back at home, back in the win column