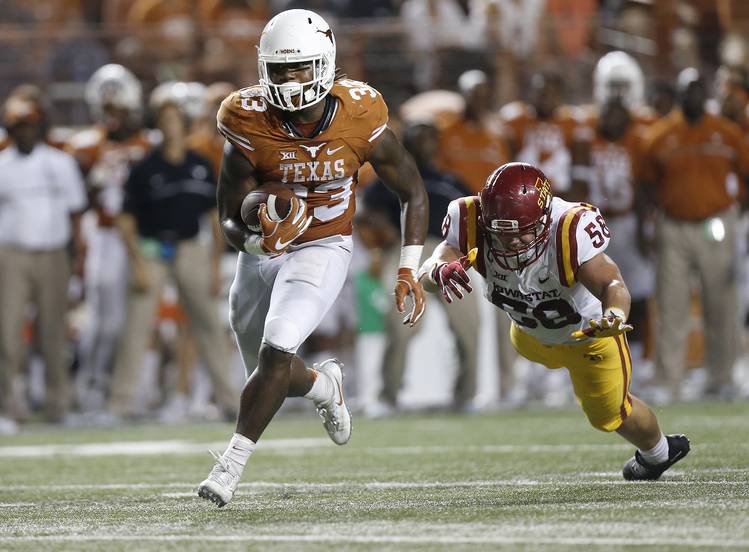 Texas running back D?Onta Foreman(33) breaks away from Iowa State Mitchell Meyers(58) for a touchdown in the third quarter at Royal-Memorial Stadium, Saturday, Oct. 15, 2016. (Stephen Spillman / for American-Statesman)

There were 162 snaps taken in Texas’ 27-6 win over Iowa State on Saturday. Here are five that ended up making a big difference:

Texas wide receiver Jake Oliver has had a breakout season, and he turned in a three-catch performance against the Cyclones. It was, however, a negated seven-yard catch that derailed Texas’ first drive of the game. Facing a second-and-9 from the Iowa State 28, Oliver made the catch but was called for offensive pass interference, and Texas was pushed back to the 43. The Longhorns punted three plays later.

Prior to Oliver’s penalty, Texas had moved 51 yards on seven plays. The Longhorns covered 56 yards over their next four possessions, and they also committed a turnover and another offensive pass interference.

Trailing 6-0, Texas put together a 10-play drive before halftime that Trent Domingue capped with a 21-yard field goal with 15 seconds to go. Texas missed two chances for a touchdown in the final minute — Jacorey Warrick had the football separated from him on an end-zone hit by Iowa State’s Kamari Cotton-Moya and Shane Buechele missed Armanti Foreman on a third-and-goal fade route — but Domingue gave Texas its first points against Iowa State since 2014.

“Coaches came in there (at halftime) and said that we were playing really well and just to keep it up,” running back D’Onta Foreman said. “We told those guys not to worry about it and we were going to put some points on the board. We believed in it and we went out there and we did that.”

Domingue would hit a 29-yard field goal in the fourth quarter, which gave the LSU transfer his fourth game with two field goals this season.

Texas had its best offensive showing of the season in the third quarter, and Heard posted the first of three Longhorns touchdowns in the period when he caught a 37-yard pass from Buechele. Heard, who was the starting quarterback in last year’s 24-0 loss at Iowa State, found a hole in the Cyclones secondary and ran unbothered into the end zone for his third touchdown catch of the year.

“(I was) close to scary wide open,” Heard said. “It’s one of those things where you start wide open and you start thinking, ‘Don’t drop the ball, don’t drop the ball.’ But Shane had put it on me and it was a great ball, and all I had to do was reel it in for the touchdown.”

Heard’s touchdown came one play after Armanti Foreman’s 37-yard touchdown catch was taken away by negating face mask penalties on him and Iowa State defensive back Mike Johnson. Foreman and three other Longhorns now trail Heard by a score for the team lead in touchdown catches.

4. Another third down stop

Texas went up 17-6 when freshman receiver Devin Duvernay hauled in a 75-yard touchdown pass, which is Texas’ longest play of the season. Iowa State, though, had a chance to claw back into the game.

In the span of three plays — one of which was a 42-yard pass completion — Iowa State marched from its 20 to the Texas 33. Following a time out, though, Cyclones quarterback Joel Lanning was sacked on a 3rd-and-5 play by defensive lineman Naashon Hughes. Iowa State punted.

Iowa State was 6 of 18 on third-down conversions, and five different Longhorns picked up a third-down sack. Defensive back Kris Boyd also broke up passes on three different third-down attempts.

“You look at our front, tonight you saw (Malcolm) Roach, you saw (Chris Nelson) inside,” Texas coach Charlie Strong said. “You saw (Poona Ford) inside and then you saw (Breckyn Hager). And (Hager) and Roach, they play with so much energy. And then (Hughes) was able to come in, get his sack. So guys know they’re going to get a limited number of plays. So when you get your chance, you’ve got to take full advantage of it.”

Texas closed out the third quarter — and essentially put the game away — when running back D’Onta Foreman scored on an 18-yard run with 53 seconds left in the period. The touchdown was Foreman’s eighth of the season, and it also pushed him over the 100-yard mark for the evening.

“We’ve got an idea maybe around that, of the carries we’d like to have on his legs and what we’d like him to do,” offensive coordinator Sterlin Gilbert said about Foreman’s 30 carries. “And sometimes it just kind of depends on the kind of carries they are. Are they big runs? Are they short yards? Are they hard yards? So all that stuff goes into consideration when you’re talking about doing those things.

“But he’s a guy that continues to battle for us, continues to produce and put up those kinds of numbers, so we’re excited about him and what he provides for us offensively.”

Whatever happened behind closed doors, it worked for Texas