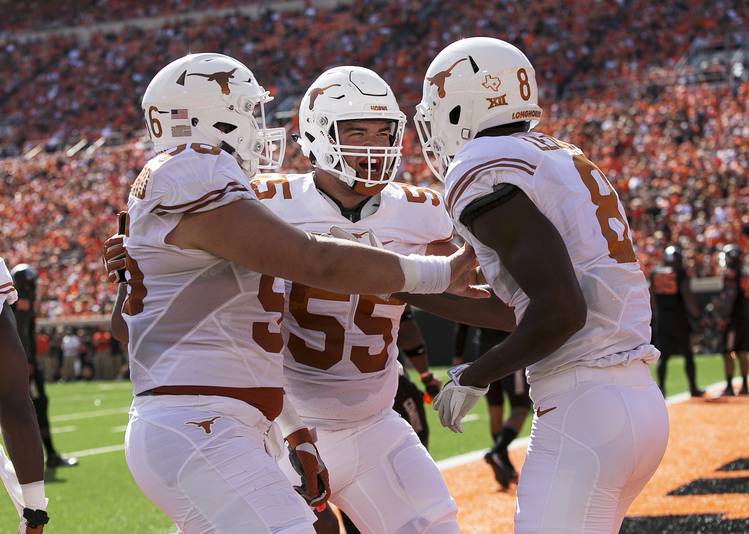 When freshman center Zach Shackelford left the game in the second quarter with an ankle injury, Texas lost the only player who had started at that position this season.

After the game, head coach Charlie Strong said he didn’t know the severity of the injury yet. Jake McMillon, a sophomore, filled in for Shackelford and drew praise both from Strong and quarterback Shane Buechele.

“It’s hard for a center to just get thrown in there like that,” Buechele said. “Jake did a great job tonight.”

If Shackelford misses next Saturday’s game at Kansas State, it will leave left guard Patrick Vahe as the only offensive lineman who has started every game. The Longhorns have started three different players at right guard — including McMillon, who started against Oklahoma State — and two different left tackles. Tristan Nickelson replaced Brandon Hodges at right tackle against the Cyclones.

As for the play that Shackelford was injured on? It was a 3-yard run by Tyrone Swoopes out of the 18-Wheeler package. Buechele lined up at wide receiver on the play.

Red-zone progress: The Longhorns entered the weekend as the nation’s 87th-ranked team in red-zone defense, having stopped opposing offenses on 16 of their 18 trips inside of the Texas 20. Iowa State scored on two of its three red zone appearances, but they were both field goals.

On Iowa State’s final drive, Chris Nelson and Naashon Hughes sacked Joel Lanning on a 4th-and-goal from the 6. That marked the first red-zone failure of the season for Iowa State, which had converted its first 20 tries into points.

Heavy workload: With Chris Warren III still sidelined by a knee injury, running back D’Onta Foreman set a career-high for carries for a second straight week (Foreman had 25 rushing attempts against Oklahoma last week). The Big 12’s leading rusher was handed the football on 30 occasions, and after the game there wasn’t concern over the junior’s heavy workload.

“He’s having an unbelievable year,” Strong said. “I haven’t seen many running backs across the country, but I think we’ve got one of the best here with him. We’ll just keep feeding him the ball. If we give it to him 40 times, it wouldn’t bother me because I know it’s going to be positive results.”

Freshman Kyle Porter had seven carries, but six came in the fourth quarter.

Odds and ends: An announced crowd of 96,851 were at Royal-Memorial Stadium; Strong improved his record at home to 9-6. … Former track standout Courtney Okolo, the Texas men’s national championship swimming and diving team and the 2016 Hall of Honor honorees were among those recognized during the game. … Sophomore Kris Boyd, who made his second straight start at cornerback, picked up all three of Texas’ pass breakups, each of which was recorded on a third-down stop. But Boyd also picked up an unsportsmanlike conduct penalty in the third quarter.

Whatever happened behind closed doors, it worked for Texas