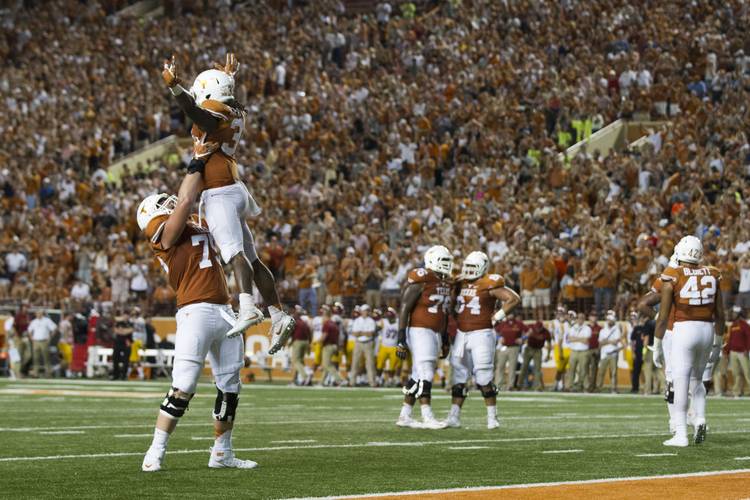 D'Onta Foreman (33) of the Texas Longhorns celebrates after an 18-yard touchdown run against the Iowa State Cyclones during the second half on October 15, 2016 at Darrell K Royal-Texas Memorial Stadium in Austin, Texas. (Photo by Cooper Neill/Getty Images)

Texas coach Charlie Strong sacrificed his friend Vance Bedford to please the masses, faced intense questioning about his schemes and still has an uncertain future with the Longhorns.

But sometimes, players need to be called out, too.

The result was a 27-6 win over the Cyclones that snapped the Horns’ three-game losing streak. Texas (3-3, 1-2 Big 12) now heads to Kansas State for what appears to be another winnable game — on paper, anyway.

Coach Bill Snyder’s club has planted some awfully good Texas teams in those wide-open Manhattan fields. The Longhorns have not won there since 2002. The Wildcats (3-3, 1-2) are coming off a 38-17 loss at Oklahoma.

Nobody was walking around acting like world-beaters after dispatching the Cyclones. Despite trailing 6-3 at halftime, Texas exploded for 21 third-quarter points. The defense pitched a second-half shutout as Iowa State never got closer than the Texas 25 after the break.

It was the first time in 15 games the Horns came back to win after trailing at halftime under Strong.

“Nah, it’s not fixed yet,” defensive tackle Chris Nelson said after Saturday’s win. “We’re going to make it go in a positive direction right now. We’re not going to get too hyped up on it. Take it as a regular game.

Defensive end Naashon Hughes said the Horns had to “return the favor” after getting beat 24-0 in Ames last season. “As a defense, we’ve been kind of bad these past couple of games,” Hughes said. “We wanted to go out there and prove we can still play football and still play Texas defense.”

As for Thursday’s team meeting, Strong and his players seemed taken aback about how it was portrayed. Two sources with knowledge of what happened told the American-Statesman it was productive and somewhat typical of any team trying to right the ship.

One website reported there were “fireworks” with players calling each other out and freshman Andrew Fitzgerald demanding more playing time. One source said the Fitzgerald tidbit was not true.

“YES! It was a team meeting yesterday in which D’Onta (Foreman) amongst other players called out the team. Certain people individually. But it was needed,” D’Onta and Armanti Foreman’s father tweeted on Friday.

The head coach acted like it was much ado about nothing.

“I don’t know why a big deal was made about that,” Strong said. “I have a team meeting every Thursday at 3:30. A few guys wanted to voice their opinion about some things, but it’s something I do every Thursday.”

Receiver Jerrod Heard thought it was comical. “When I heard about what was being said out in the media when we had a team meeting, it was kind of shocking,” Heard said. “But no, we’re all together as one. If anything, we’ll just stay together and we’re going to fight for each other.”

Along those lines, it’s true that center Zach Shackelford has a left ankle injury, the severity of which is still unclear. Sophomore Jake McMillon played the entire second half and drew praise from Strong and quarterback Shane Buechele.

It’s false that receiver John Burt was injured against Iowa State. By all appearances, he simply got benched after his recent struggles. Dorian Leonard had a team-high five catches for 47 yards, and Devin Duvernay had a fantastic 75-yard touchdown catch.

Gilbert said Leonard and Burt’s playing time was about “being able to be productive and making sure we’ve got guys in there that are doing that.”

Kris Boyd and Jeffrey McColloch’s bang-up performances will be discussed in the days ahead, as will Erick Fowler and D’Andre Christmas’ roles now that their redshirts are long gone.

“I can’t speak for the rest of the team, but I think we play for Charlie and each other,” defensive end Breckyn Hager said. “We’re tired of all the crap, and we love that man. We want to keep him in-house.”

If that’s indeed the case, the Longhorns need to keep playing like it.