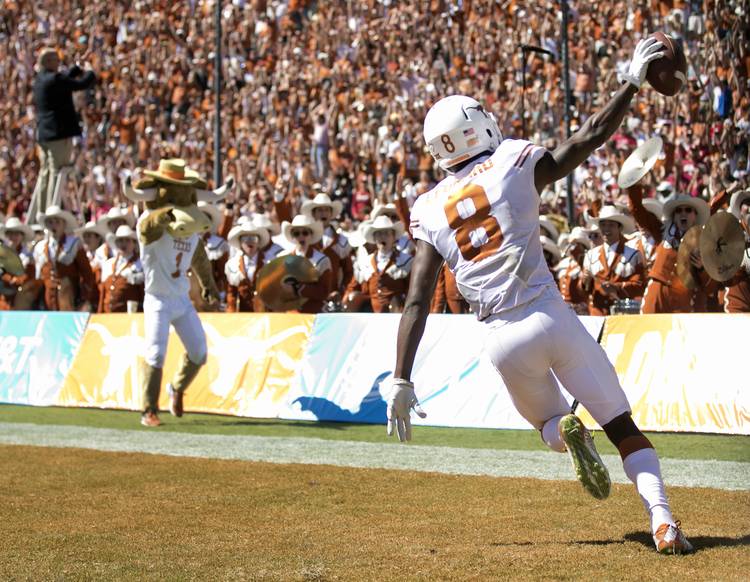 Texas receiver Dorian Leonard reacts to the crowd after scoring a touchdown against OU in the third quarter at the Cotton Bowl in Dallas Saturday October 8, 2016. JAY JANNER / AMERICAN-STATESMAN

Jake Oliver didn’t have a single catch to speak of in 2014 and 2015. This year, he’s tied for second on the team with 17 receptions and is one of the most-targeted players out wide.

Jerrod Heard knew he wasn’t going to make it at quarterback, so he asked to be moved to receiver this season. He’s also got 17 catches for a team-high 220 yards and has reeled in three touchdowns.

In the last two years, Dorian Leonard had one catch in 19 games — a long-forgotten 7-yard grab against Oklahoma in 2014. This season, he’s got 11 catches for 206 yards and two scores.

“Especially in this new offense, I’m not even worried about the depth chart or anything like that,” Leonard said Monday. “People are going to have their chances to play and make plays. It’s just you have to make something happen when you go in.”

The Longhorns haven’t had a real superstar out wide since Jordan Shipley scored twice in the 2009 national championship game. But in this era of video-game spread offenses, maybe they don’t need just one against the Wildcats. A laundry list of Longhorns will do.

“The thing we still got with this receiving corps that we’re excited about is that there’s depth,” said Gilbert, UT’s first-year offensive coordinator.

At present, Texas (3-3, 1-2) has 10 capable receivers in the rotation. There’s so many that senior Jacorey Warrick skipped the Oklahoma State trip because of injury, and few noticed. John Burt suffered a hand injury against Notre Dame and a hip pointer last week, according to coach Charlie Strong. Burt was a non-factor against Iowa State, but the Horns still finished with a season-high 296 passing yards.

Armanti Foreman had a 37-yard touchdown wiped out against the Cyclones because of offsetting facemask penalties. Quarterback Shane Buechele simply went to the other side of the field on the next play, finding Heard for a 37-yard score.

“We have so many athletes on our side of the ball,” said Buechele, who has a UT freshman record 1,566 yards and counting. “You try to get them all the ball, just to see what they can do. My favorite receiver is the open guy.”

Since Shipley left, Texas has produced only one 1,000-yard receiver. Mike Davis had a productive career and finished fifth in UT history with 200 receptions from 2010-13. He came close in 2012 with 939 receiving yards. John Harris emerged from relative obscurity in 2014 to become Tyrone Swoopes’ go-to play-maker. Harris had 1,051 yards and seven touchdowns.

It’s possible that no receiver from this current crop ends up crossing that 1,000-yard threshold. However, Leonard said all the receivers are pushing each other.

“When you go in, just make it known that you’re in the game,” Leonard said. “Make plays as far as blocking, running the right routes and stuff like that. Do what you need to do to get the coaches’ attention and help your team out.”

Freshman Devin Duvernay has had everyone’s attention the past two weeks. The talented speedster caught a 63-yard touchdown pass against Oklahoma. Then he went racing downfield and reeled in a 75-yarder against Iowa State. That catch was the primary reason Duvernay was named the Big 12’s newcomer of the week on Monday.

“Usually in this scheme, for a young guy it takes four or five weeks, and now you’re beginning to see it with him,” Strong said. “He’s a guy that’s always a deep-ball threat because he’s just going to run by people.”

Duvernay said the offensive plays are “simple, basic and not too hard.” He simply needed to memorize some things and get hints on how to play some things.

“I feel like I’m building confidence in myself and the coaches,” Duvernay said. He was one of four athletes who originally signed with Baylor but wound up at Texas because of the school’s sexual assault scandal.

And to think, there’s more in the pipeline.

“Some of our freshmen coming in, Davion (Curtis) and Reggie (Hemphill-Mapps), those guys have so much speed,” Leonard said. “I’m really looking forward to those guys playing.”

Big 12 expansion reactions range from disappointed to ‘pissed off’