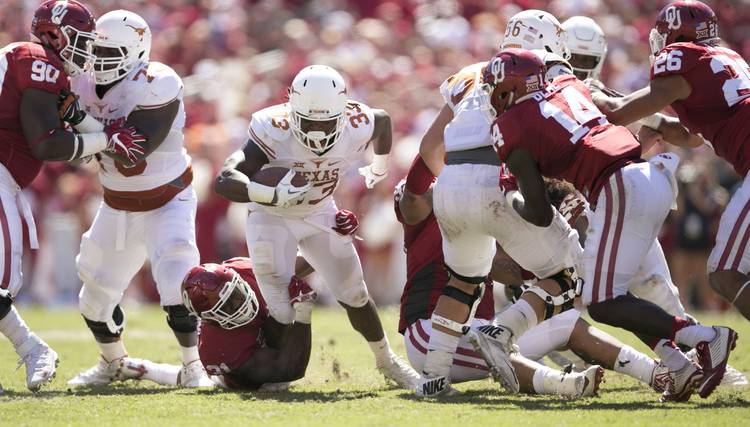 UT running back D'Onta Foreman tries to get past OU linebacker Ogbonnia Okoronkwo in the second quarter at the Cotton Bowl in Dallas Saturday October 8, 2016. JAY JANNER / AMERICAN-STATESMAN

They aren’t easy to find, but Texas junior D’Onta Foreman has a few flaws.

Foreman currently ranks 13th in the nation in rushing yards (731) and second in rushing yards per game (146.2), and he has scored eight times this season. The six-foot-one-inch, 249-pound Foreman has 117 rushing attempts, but he has been stopped behind the line of scrimmage on only six of those carries.

Foreman, though, is responsible for two of the three fumbles that Texas has lost this fall. Those turnovers led to an Oklahoma touchdown and an Iowa State field goal. On Tuesday, Foreman acknowledged that holding onto the football was something he needed to work on.

“Gotta protect the football better than what I’ve done,” Foreman said. “I carry the ball kind of loose at times, so (assistant coach Anthony Johnson) stays on me about holding the football. He tells me to run hard, and I feel like I’ve been doing that.”

Foreman was later asked if anyone had suggested that he go down instead of fighting for extra yardage. Foreman said that conversation hadn’t happened, and he added that “I feel like if they did, I wouldn’t listen to them anyways.” He did, though, concede that he needed to fall forward if he ran into a pack of defenders.

Foreman has rushed for 100 yards in seven straight games, which is a streak that has been bested on the Texas campus by only Earl Campbell’s 11-game run. This week, Foreman and the Longhorns will face a Kansas State defense that is allowing a Big 12-best 90.3 rushing yards per game.

Texas midseason report: ‘We’re not going to let y’all down’

Staff takeaways: Second half of season will offer lots of drama for Longhorns