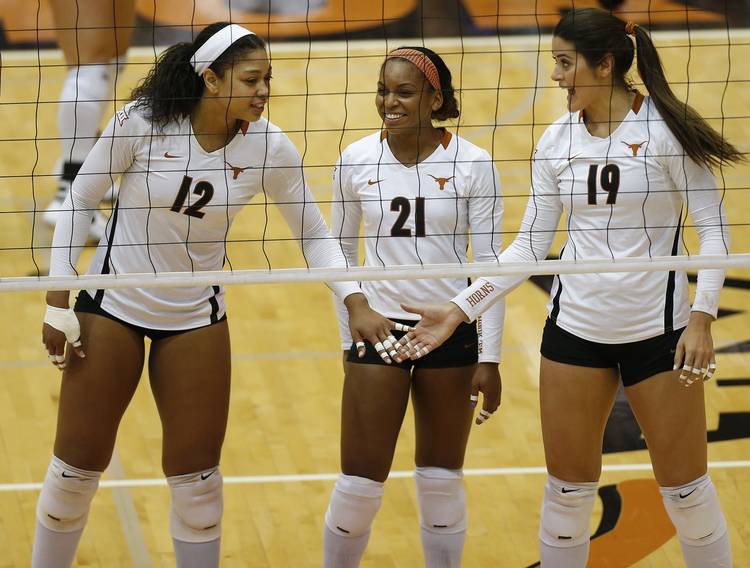 On Wednesday, Texas will try to leave little debate as to who the best team in the Big 12 is.

After a week-long hiatus, Texas returns to the volleyball court for a home match against TCU on Wednesday. Texas (14-2) is ranked second in the American Volleyball Coaches Association’s national poll — the Longhorns grabbed the only one of the 63 first-places vote that Nebraska didn’t secure— and it currently tops the Big 12 standings with a 6-0 mark.

TCU is 3-4 against Big 12 teams this year, but the Horned Frogs knocked off eighth-ranked North Carolina in September. TCU also handed Texas its only conference loss during the 2015 season.

“You definitely can’t look over any team,” middle blocker Yaazie Bedart-Ghani said. “Last year definitely reminded us of that, and that lets us know that we need to take care of business from the start.”

Over on the football field, Texas’ offense has thrived as quarterback Shane Buechele has six receivers with double-digit receptions. That spread-it-out philosophy has also worked for the volleyball team and its quarterback.

At 11.46 assists per set, senior Chloe Collins only trails Kansas State’s Katie Brand (11.85 apg) among Big 12 setters. Texas leads the Big 12 with its .307 hitting percentage (Kansas State comes in second at .257), and outside hitters Micaya White, Ebony Nwanebu and Paulina Prieto Cerame are ranked third, fourth and eighth in kills. White and Nwanebu are averaging 4.38 and 4.07 kills per set, while Prieto Cerame is tallying 3.44 kills per set.

“Having those types of weapons just makes my job a lot more easier and a lot more fun,” Collins said. “I can set either one of them and be confident that they’re going to put the ball away and be a force to be reckoned with.”

Texas and TCU will “Volley for a Cure” in Gregory Gym at 7 p.m. on Wednesday night. Survivors of breast cancer can claim a free ticket to the match, and the first 750 fans will receive pink rally towels. Fans are encouraged to ditch their burnt orange gear and wear pink to the match.

Wednesday’s match will also be held on the same night of the final presidential debate between Hillary Clinton and Donald Trump. When asked on Tuesday about which one of her teammates would make the best politician, Collins endorsed Croatia native Mirta Baselovic.

“She’s not a U.S. citizen, but she likes to think she is at times,” Collins said of her junior middle blocker. “She finds great joy in making comments about our political debates that we have going on, especially with the presidential election going on. She’s a very stubborn and straight-forward person, so I think that she would make a great person for that.”

Texas’ five best — and worst — plays of the season, so far

Texas midseason report: ‘We’re not going to let y’all down’