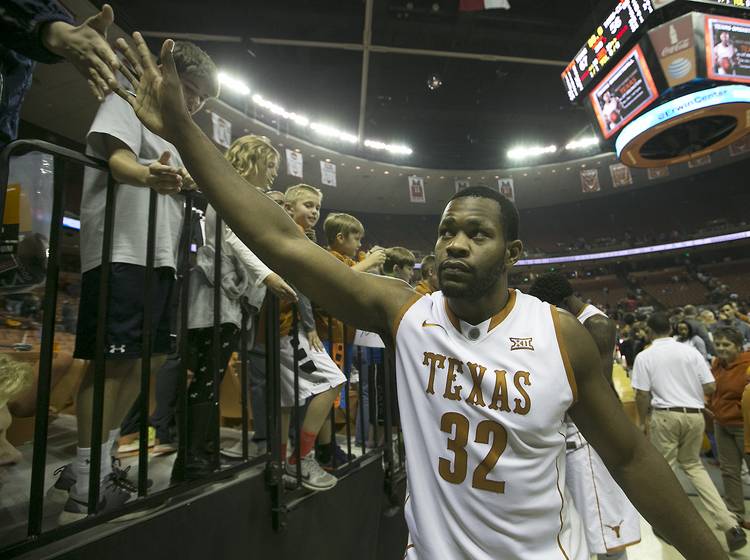 Texas senior Shaquille Cleare and the rest of the Longhorns will greet fans about 5:30 p.m. Thursday outside Gregory Gym before the Texas Tip-Off event, which is scheduled to begin at 7 p.m. RALPH BARRERA/ AMERICAN-STATESMAN

Texas senior Shaq Cleare looks around the locker room inside Cooley Pavilion and sure sees a bunch of new faces.

Gone are Cam Ridley and Prince Ibeh. Freshmen big men Jarrett Allen and James Banks are now the ones colliding with Cleare in practice.

“It’s gonna be an interesting year,” Cleare said. “One thing I like about this group that came in, this group competes at a high level.”

Texas men’s basketball fans get their first glimpse of the new-look Longhorns during the Texas Tip-Off event at 7 p.m. Thursday inside Gregory Gym. Admission is free, but fans must obtain a ticket beforehand from the UT box office. All seating is general admission. Doors open at 6 p.m., but players will arrive around 5:30 p.m. to greet fans lined up outside.

Basketball practice began weeks ago, but this event is the modern-day equivalent of Midnight Madness. The Horns likely will go through some warmups and then have a competitive intrasquad scrimmage. If it’s anything like last year, a mini-dunk contest will break out eventually.

Judging from some of the players’ preseason comments, the Horns have really taken coach Shaka Smart’s philosophy to heart: To win, you must compete at everything. Don’t leave anything to chance, or Paul Jesperson just might sink a half-court shot to end your season.

“I think we can be top three in our league. I really think so,” sophomore Kerwin Roach said. “I feel like we’re going to be up and rolling around conference time.”

“I think Texas is gonna be ridiculously young, but I think they’re ridiculously talented,” Kansas coach Bill Self said. “So I wouldn’t sleep on the Longhorns at all.”

Smart still has weeks before the season opener against Incarnate Word on Nov. 11 to work out the kinks and answer some key questions:

Who’s the point guard?: It’s possible UT doesn’t have a true point guard. That’s probably why Smart is trying so hard to land Matt Coleman, the 32nd-best prospect in the nation from Oak Hill Academy in Virginia. Roach and Jones will be key ball handlers with sophomore Eric Davis playing the alpha dog.

How good is Allen, really?: To the vast UT audience, the St. Stephen’s product is simply the quiet kid who fiddled around and kept Smart waiting during the recruiting process. But the 6-11 forward averaged 10.6 points and a team-high nine rebounds in five games with the Team USA Under-18 squad this summer.

Allen’s “Fro Bros” teammate, James Banks, also has impressive raw ability. How Allen, Banks and Cleare work together will be a key non-conference storyline. Dylan Osetkowski, a 6-9 center from Tulane, must sit out this season per NCAA transfer rules.

What’s the overall attitude?: One recurring theme last season was the team’s ability to get “bummed out” whenever things went south. That can’t be an issue any more. Senior Kendal Yancy has taken on a greater leadership role, and Davis may embody this team’s emotional heartbeat.

Last year, everything was new — the new coach who didn’t know the players and vice versa. Now, there’s enough returning veterans who know what to expect from Smart and his assistants. This plane should continue its ascent, even with all the new passengers.

Staff takeaways: Second half of season will offer lots of drama for Longhorns