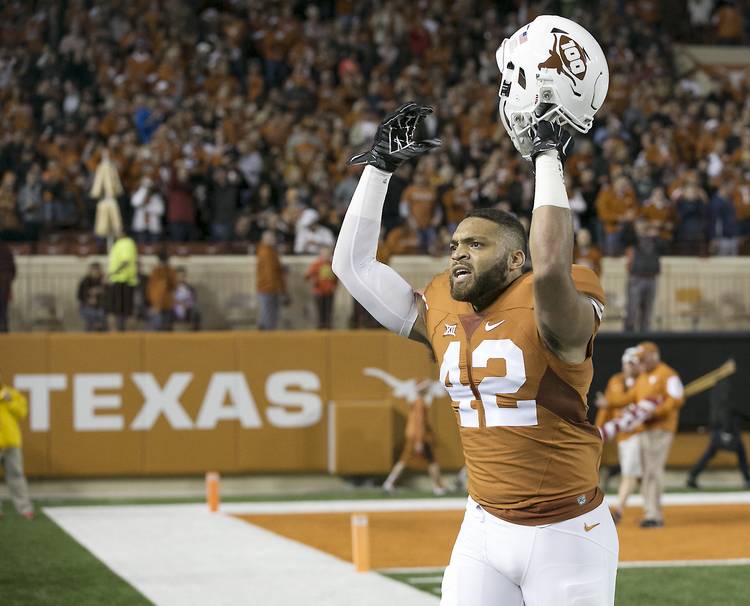 Bad things happen to the Texas Longhorns when they venture into Manhattan, but there are indications this year’s trip to the Little Apple could be different.

Although the Texas defense is improving, it can still look silly against a good quarterback and an up-tempo offense.

Kansas State won’t present those problems. The Wildcats have the weakest passing attack in the Big 12 and one of the worst in the nation (112th in yardage, 113th in efficiency).

Jesse Ertz, a game manager who lacks an accurate arm, will try to play through a shoulder injury. Backup Joe Hubener is likely to see some action, too.

Texas allows 278.5 yards through the air, but K-State might not be able to take advantage. The Cats just faced two other porous secondaries and the result was a combined 329 yards passing against Texas Tech and Oklahoma.

The Wildcats lack a big-time receiver or running back. The strength of their offense is an excellent line, yet the Longhorns are getting at least competent at limiting run damage.

K-State is favored by 2½ points. History certainly says go with the Wildcats. The Longhorns are 1-6 in Manhattan — their only win coming in 2002 — and they’ve been outscored 234-107.

This game will largely be on Shane Buechele’s back. The Horns freshman QB needs to limit the turnovers because if he gives the Wildcats extra possessions, they will eat up the clock.

The pick: Texas plus the short odds. The Longhorns are 1-7 both straight up and against the spread in their past eight road games, but this looks like the rare favorable matchup in which they sneak out a victory. Overall, Texas has been the better point-spread team this year, with a 4-2 record as compared to K-State’s 2-4.

Big 12 look: Yes, Texas Tech is in a tailspin and Oklahoma is riding high. However, look for the Red Raiders (+14) to push the Sooners hard in a prime-time game in Lubbock. … TCU (+6½) probably isn’t good enough to win in Morgantown, but the rested Horned Frogs can take unbeaten West Virginia to the wire. Again, grab the points.

Texas sports notebook: Johnson, Bedart-Ghani step up in the middle