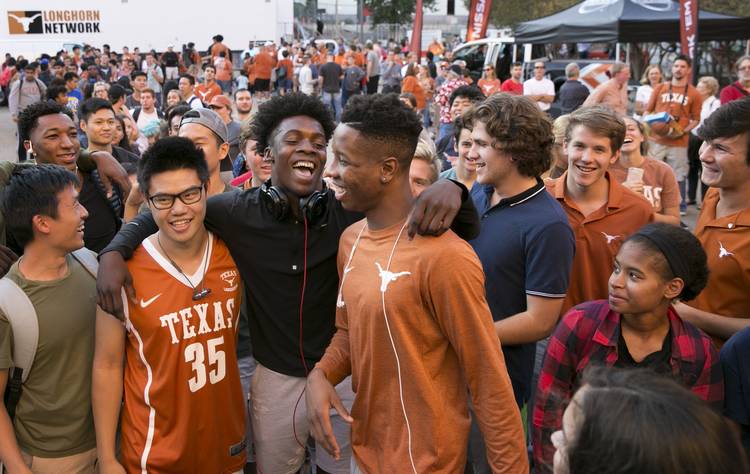 After the pyrotechnics cooled and the pre-game hullabaloo subsided, Texas coach Shaka Smart grabbed the microphone and read the warning label on his Longhorns.

You’ll get no argument from Eric Davis. “I know he was talking about me when he said that, for sure,” the sophomore guard said. “We’re all confident.”

Jacob Young believes everyone in the locker room deserves to wear burnt orange.

The Longhorns’ raw athleticism was apparent Thursday during an intrasquad scrimmage billed as the Texas Tip-Off. It was the public unveiling of Smart’s revamped team that features seven newcomers and no returning starters.

Get to know these names, Texas fans, because you’ll see them a lot from November to March.

Freshman Andrew Jones from Irving had 10 points, eight assists and two turnovers. Young, a Houston native, hasn’t met a 3-point shot he doesn’t like. He went 2 for 8 from long range and finished with 10 points. “I love to shoot. I can shoot it better, though,” Young said.

Freshman center James Banks had a relatively quiet night, getting just four points, one rebound and four turnovers in 22 minutes. His only field goal was a two-handed flush with about 45 seconds left in the first half.

Smart said the freshmen “had some jitters, but that’s why we do this.”

“We play pretty hard. We’ve got to play more smart,” Smart said. “That’s what a young team has to learn. We have to understand that we need every guy on our team to be connected. Hopefully we can get that.”

The one freshman drawing the most attention is Jarrett Allen. The 6-foot-11 forward from St. Stephen’s was held out due to a tweaked left hamstring. Smart said Allen could have played if the trainers wanted to push it, but it’s only October. Allen will try to go Wednesday in a closed scrimmage against SMU at the Erwin Center.

“I was really bummed,” Allen said. “This is our first actual game against each other, and it was a big moment for UT basketball. It’s just a shame I couldn’t be a part of it.”

The few returning veterans Texas does have made plenty of quality plays.

Davis drilled a 3-pointer from the left wing in the closing seconds to give his team a one-point lead with 26 seconds left. He went 4 for 4 from 3-point range and finished with 14 points.

Kerwin Roach showed plenty of nifty moves as he morphs into a point guard. He hit a stop-and-pop 15-footer from the elbow and then followed it with a driving layup. Later in the first half, Roach exploded from half court, raced through the lane and laid it in, using his left arm to clear out a defender in the process.

Roach (15 points) said he’s been working with assistant coach David Cason on attack angles. “I’ve got to really pick and choose my spots on the floor and when I can attack,” Roach said. “You’ve got to get to other people involved, too. so it’s really about picking and choosing.”

Center Shaq Cleare also flashed his baby hook shot in the lane. On the next possession, he dealt a behind-the-back pass to Tevin Mack for a wide-open 3-pointer. Mack finished with 16 points and went 7 for 8 from the floor.

Afterward, UT coaches and players stayed to sign autographs and pose for pictures. This was the second year for this event, and Smart hopes it’s a tradition that keeps growing.

“Our guys were genuinely nervous tonight because they were so excited about playing in front of fans,” Smart said. “What we want to build here long term is a special connection with our team and particularly our fans with a really special feeling between one another.”