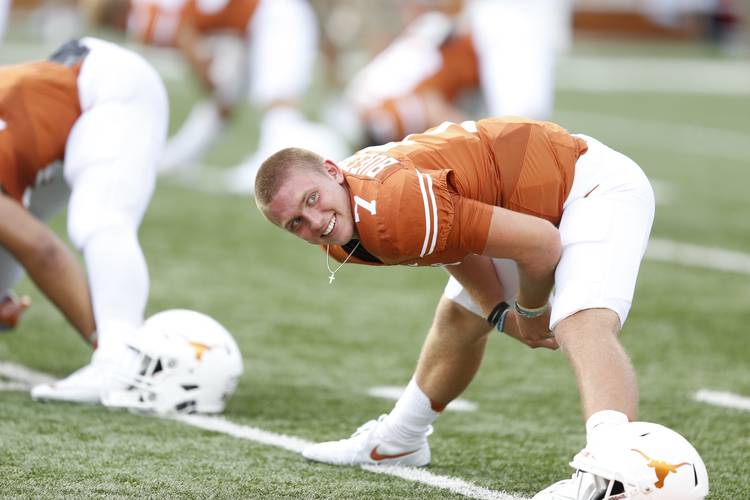 Seven is the number worn on the jersey of quarterback Shane Buechele, who has seven receivers with between 160-220 receiving yards. Junior running back D’Onta Foreman has had seven gains of at least 20 yards this season (six rushes, one catch). Tim Crowder stopped a school-record seven players behind the line of scrimmage in a 2006 win over Rice.

Seven also accounts for the number of freshmen quarterbacks who entered this week with at least 1,300 passing yards. One of those is Buechele.

Buechele, who was preparing for Arlington Lamar’s district game against North Crowley at this point last year, has completed 123 of his 193 passes this season. He has thrown for 1,500 yards and 13 touchdowns; five of his passes have been intercepted.

What has Buechele shown the Texas coaches in his first year?

“Just steady growth and steady development,” offensive coordinator Sterlin Gilbert said. “With a young guy like that, those are your goals day in and day out with him. Each one of those games reps and practice reps is essentially a growth rep for him.”

Of this magnificent seven — a group that counts Buechele, Eason and Hurts as true freshmen — only Buechele and Darnold have thrown 10 touchdowns. Darnold has thrown for 13 scores, and he’s the only one of these quarterbacks with a better completion percentage than Buechele (66.7).

Additionally, Buechele has rushed for 142 rushing yards (on 46 carries). That ranks fourth among those seven quarterbacks.

“Nothing has really been too tough (to adapt to),” Buechele said of his first year. “All of the guys kind of prepared me really well just for this season. It’s been a fun year.”

Buechele said he is still getting used to playing with noise on the road, and Texas has not often asked him to use the middle of the field. He also said that he wants to work on being a leader in the locker room.

Wide receiver Dorian Leonard, though, said Buechele was a leader before the season began, and he cited times that the freshman asked coaches to turn on the practice field’s lights so he could get extra reps in. Buechele said he developed a fondness for practice and preparedness from his sports-based family (Buechele’s father is Texas Rangers bench coach Steve Buechele).

“Going to little league games, I was always early. … We’d get there at 12 (for a game that started at 12:30),” Buechele said. “Just realizing that you had to have to do extra to be great. Once you really understand what to do, I think you go out and do it. For me, it’s just been doing the little things and doing extra.”

Buechele is tied for fifth in wins among those seven aforementioned quarterbacks, but he also has played in one fewer game than his contemporaries. This week, Texas (3-3) and Buechele will look to secure their first road win of the year against a Kansas State defense that is allowing 253.2 passing yards per game.

Freshmen strut their stuff in public debut during Texas Tip-Off