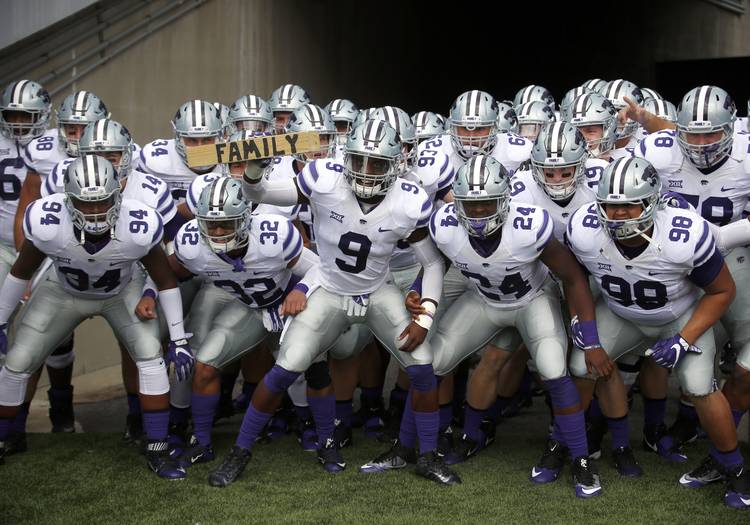 MORGANTOWN, WV - OCTOBER 01: The Kansas State Wildcats takes the field against the West Virginia Mountaineers during the game on October 1, 2016 at Mountaineer Field in Morgantown, West Virginia. (Photo by Justin K. Aller/Getty Images)

Each week, the American-Statesman will interview the beat writer of Texas’ opponent. This week, the Wichita Eagle and Kansas City Star’s Kellis Robinett offers insight on Kansas State. You can find Kellis — who’s a 2001 graduate of Anderson High School — on Twitter at @KellisRobinett.

How important to this Kansas State offense is QB Jesse Ertz, who injured his shoulder in last week’s loss to Oklahoma but is expected to play?

Very important. Though Ertz isn’t having the best of seasons, there is a big drop off from him to backup Joe Hubener. K-State will need him to play and play well to beat Texas.

In your opinion, who is the most dangerous option in Kansas State’s rushing attack?

Dalvin Warmack has the most big-play potential, but he only sees a few touches in each game. Charles Jones, who had a nice game against Texas last year, is the primary back fans will see Saturday.

Is something wrong with Kansas State’s defense or have the Wildcats just been playing better offenses over the last two weeks?

K-State always seems to have trouble with spread offenses, and that showed against Texas Tech and Oklahoma. Texas, and its new up-tempo attack, should pose another difficult challenge.

Kansas State is 3-0 at home, and Texas hasn’t won in Manhattan since 2002. Why are the Wildcats so tough to beat at Bill Snyder Family Stadium?

Strong fan support helps. So does a loud stadium. But the main thing is the way K-State plays at home. The Wildcats avoid mistakes and rarely beat themselves. That makes it hard for visiting teams to win in Manhattan.

Name one Kansas State player that Texas fans aren’t talking about — but should be.

Jordan Willis is one of the best defensive players in the conference. The senior defensive end is an excellent pass rusher that knows how to get to the quarterback and make tackles for loss. If K-State makes a big defensive play Saturday, there’s a good chance he’s the one making it.

Finally, any restaurant recommendations for the Texas fans making the trip to Manhattan?

So Long Saloon has the best burgers in town. Taco Lucha, next door in Aggieville, has the best tacos. If you’re downtown on Poyntz, try Tallgrass Taphouse or Bourbon & Baker. For breakfast: The Chef.

Welcome to K-State: Longhorns look for first win in Manhattan since 2002