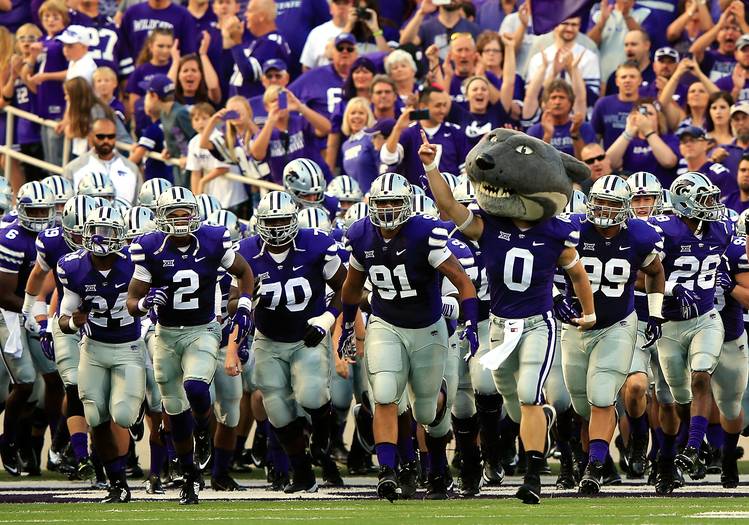 The Kansas State Wildcats mascot, Willie the Wildcat, leads the team onto the field ahead of the game against the Auburn Tigers at Bill Snyder Family Football Stadium on September 18, 2014 in Manhattan, Kansas. (Photo by Jamie Squire/Getty Images)

The stats indicate Texas should come away a winner in Manhattan. Kansas State quarterback Jesse Ertz is hobbled, and offensively the Wildcats look like the 2014 Longhorns. But this is still K-State, a team that’s 4-0 vs. Texas at home since 2002. And last I checked, Bill Snyder is still prowling the sideline. It’s hard to have full faith in a Texas squad that’s 1-6 in true road games since the start of the 2015 season. This is the type of win Charlie Strong needs badly, though. The next three games present all sorts of problems — Baylor, at Texas Tech and then West Virginia. It’s imperative the Horns solve their road woes and get what looks to be a winnable game.

Texas’ road woes against Kansas State are overrated. This is only UT’s fifth trip to Bill Snyder Family Stadium since that last, lone victory in Manhattan in 2002, and Vince Young never played there, and Colt McCoy’s only appearance was as a freshman. My guess is these Longhorns are more closely tied to last year’s 23-9 win over the Wildcats than that 17-14 win in 2002 when Shane Buechele was 4 years old. What is relevant, though, is the fact that Texas hasn’t won away from home this season, and a victory would be another step forward for Charlie Strong and company.

I just have a feeling. Can’t explain it. It’s not like Texas beat Ohio State last week. It took care of business against a flawed Iowa State team, though it was a team that took Baylor and Oklahoma State to the limit. I just have a hunch the Longhorns are going to play really well against an offensively-challenged Kansas State. If the defense doesn’t seize upon momentum it created last week, it never will.

Kansas State receivers Dominique Heath, Byron Pringle, Deante Burton and Isaiah Zuber aren’t ranked very high among the Big 12 leaders, but Texas has allowed monster games to opposing receivers this season. Cal’s Chad Hansen had 12 catches for 196 yards and a touchdown. Oklahoma State’s Jalen McCleskey caught four passes for 102 yards and two scores. OU’s Dede Westbrook had 10 catches for 232 yards and two scores. All those games were losses. It’s up to Texas to make sure no Wildcat receiver wakes up a hero Sunday morning.

Welcome to K-State: Longhorns look for first win in Manhattan since 2002

The Eyes of Texas: Three Wildcats the Horns will be watching