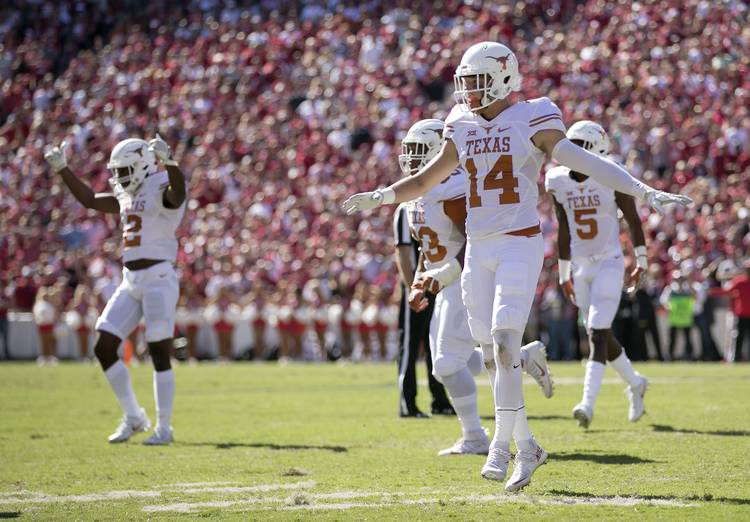 Foreman, the Big 12’s leading rusher, is averaging 146.2 yards per game, which ranks second nationally. And only Earl Campbell has bettered Foreman’s active run of seven straight 100-yard games (Campbell did it 11 times in a row). But can Foreman keep that streak alive against a Wildcats defense that’s allowing a Big 12-low 90.3 rushing yards per game? Last year against the Wildcats, Foreman ran 10 times for 43 yards.

Kansas State allowed 320 passing yards over its three non-conference games, but its best showing in Big 12 play so far has been holding West Virginia’s Skyler Howard to 298 yards. In the past two weeks, Texas Tech’s Patrick Mahomes II and Oklahoma’s Baker Mayfield have combined for 850 yards. Buechele is looking for his first 300-yard game of his career — he finished four yards shy of that last week — but can he do it against a team that’s recorded 12 sacks and six interceptions?

Kansas State has attempted 42 fewer pass attempts than Texas, but the Wildcats are expecting to have Ertz back from a shoulder injury.  Kansas State quarterbacks have been intercepted once in the last three games against Texas, one nabbed by Haines last year. The senior safety has both of Texas’ picks this season, and he’s 23 yards shy of Texas’ career record for yards off interception returns.

This game features two kickers who should compete for All-Big 12 honors. No other kicker in the conference has booted more field goals than Texas’ Trent Domingue and Kansas State’s Matthew McCrane. Domingue has converted nine of his 12 field goal attempts, his longest kick a 43-yarder against UTEP. McCrane also is 9 of 12, with a long of 42.