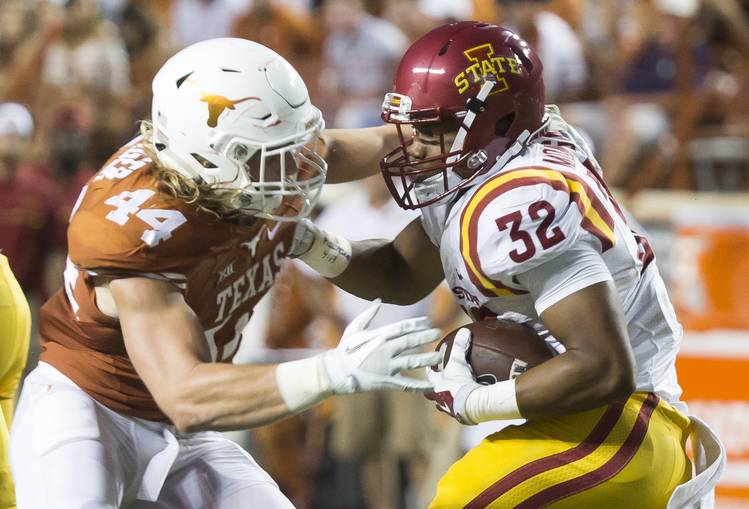 If you ignore that second half against Oklahoma, Texas has allowed 20 points in its six quarters since Charlie Strong took over the defense. The Longhorns are coming off their best defensive showing since a 2014 shutout win over Kansas. Kansas State, meanwhile, has been held to less than 20 points in two of its last three games. And while Texas’ secondary has taken a lot of heat, the Wildcats have the Big 12’s lowest-rated passing offense. They are, however, averaging 175.7 rushing yards per game, so this will be a test for the front seven.

Texas has yet to update the status of freshman center Zach Shackelford, who left last week’s 27-6 win over Iowa State with an ankle injury. If Shackelford — who once was a Kansas State commitment before he signed with Texas — is unable to play, Texas will trot out a new starting lineup for its offensive line for the fifth time this season. Shackelford and left guard Patrick Vahe are the only linemen who haven’t missed a start this season. Texas is allowing two sacks per game.

3. Who’ll be the top receiver?

How deep is Texas’ receiving corps? In six games, six receivers — John Burt, Jacorey Warrick, Jake Oliver, Jerrod Heard, Armanti Foreman and Dorian Leonard — each have either led or shared the team lead in catches. And that list doesn’t even include Devin Duvernay, the reigning Big 12 newcomer of the week. Quarterback Shane Beuchele told reporters this week that “My favorite receiver is the open guy,” so who gets the most catches against the Big 12’s fifth-ranked pass defense?

4. Will Texas win away from Royal-Memorial Stadium?

Texas is 3-0 so far at Royal-Memorial Stadium, but is 0-3 away from it. Consider this: The Longhorns haven’t won in Manhattan since 2002, but the more concerning statistic has to be that they’ve also lost five of their last six true road games. And throw in the 1-4 record in their five neutral field appearances in the Charlie Strong era, Texas is 5-11 away from DKR since 2014.