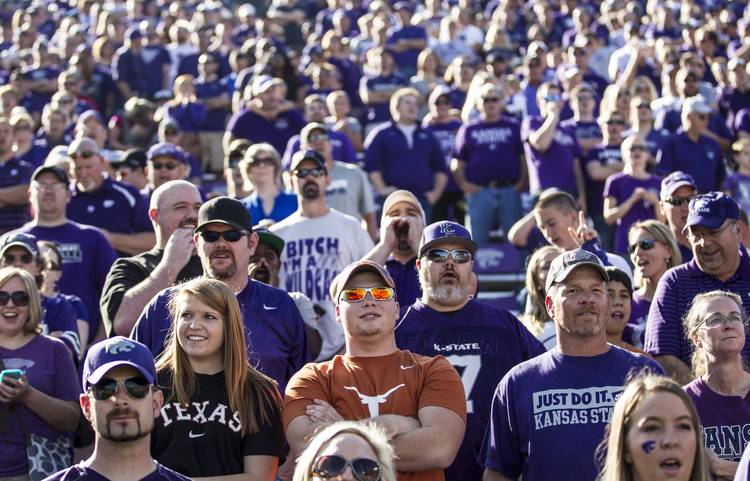 That’s music to John Currie’s ear. The Kansas State athletic director, a fast-rising administrative star, wants his school to have the best fan and customer experience in the Big 12. It must be working. The Wildcats have raised more than $200 million in seven years. That’s more money than the school raised in the previous 48 years combined.

Unfortunately, the hospitality doesn’t extend to the field, something Texas knows all too well. The Longhorns (3-3, 1-2 Big 12) haven’t won in Bill Snyder Family Stadium since 2002, and they’re likely headed into a booby trap Saturday morning.

“I don’t think necessarily it’s the place, but Kansas State, they’re such a well-coached team,” UT safety Dylan Haines said. “You all have heard this and known this, they don’t beat themselves and stuff like that.”

It’s another road game, so the Longhorns have heard all these questions before. Texas is 1-6 in true road games since the start of the 2015 season. Far better Texas teams than this one have come to Manhattan and lost. But these Wildcats are also 3-3, with a 1-2 record in league play, same as the Horns.

Texas’ 2005 national championship team didn’t have to play K-State thanks to the league’s scheduling at the time. Jamaal Charles, Limas Sweed and a young Colt McCoy lost a 45-42 shootout in Manhattan the following season.

Four years later, Texas had already begun its descent and lost 39-14 in what became a forgettable 5-7 campaign after playing for the 2009 national title.

In 2012, Kansas State scored 28 straight points and rolled 23rd-ranked Texas with a 42-24 win. The seventh-ranked Wildcats clinched a spot in the Fiesta Bowl as fans chanted, “We own Texas! We own Texas!”

Texas coach Charlie Strong got a rude welcome to K-State in 2014. The Longhorns looked sloppy in all phases and got blanked 23-0, UT’s first shutout loss since 2004.

Texas has a 1-6 all-time record in Manhattan. What’s worse is the Wildcats have a 9-7 series record over the Longhorns no matter the location.

UT coaches don’t harp on stats like that, but players said Strong usually keeps them apprised of relevant series history.

Defensive end Breckyn Hager said it still feels like a dream playing at Royal-Memorial Stadium. “You get another wind of energy you never knew you had. It’s really special playing at DKR,” he said.

How can the Horns get that feeling on the road?

“That’s when the true players are going to come out,” Hager said. “We’re going to see what players on defense are really going to take control of this team and decide where we want to be this year.”

Texas gained some defensive confidence last week in a 27-6 win over Iowa State, a team now 1-6. The Longhorns changed the lineup in the secondary, starting Kris Boyd and John Bonney at corner along with Jason Hall and Haines at safety. The unit pitched a second-half shutout.

K-State quarterback Jesse Ertz (shoulder) is expected to play, but K-State’s offense has been anemic at best. The Wildcats average just 31.3 points and have the worst passing offense in the Big 12. “I haven’t coached them well enough,” legendary K-State coach Bill Snyder said.

Ertz has completed just 49.6 percent of his passes for an average of 126 passing yards per game. It’s the type of tailor-made opponent for a Texas secondary that needs more confidence.

Of course, Snyder still has a stout defense carrying the ’Cats. They’ll try to stop Texas running back D’Onta Foreman, who ranks second nationally in yards per game (146.2) and is looking for his eighth straight 100-yard showing. Earl Campbell holds the school record with 11 consecutive 100-yard games in 1977.

Texas center Zach Shackelford, who originally committed to Kansas State, will likely be out with an ankle injury. Jake McMillon filled in for him against Iowa State and played well.

While this game is a snoozer for some, it’s critical for Strong. A win here keeps the Horns on track toward bowl eligibility. This coach needs every win he can get.

“We have not played well on the road,” Strong said. “Didn’t play well out at California, didn’t play well at Stillwater, and even in Dallas we didn’t play well, and we’re going to have to. We always just talk about packing your defense. The defense has to come alive, and we just need to go from the start.”

Those in purple will be roaring when they open the gates. Several UT players remembered how the KSU students crank up the noise well before kickoff.

“Kansas State is an interesting crowd,” defensive end Naashon Hughes said. Asked about the Wildcats’ style, he said, “They try to grind on you.”

Staff takes: Playing in Manhattan is a real chance to change recent history