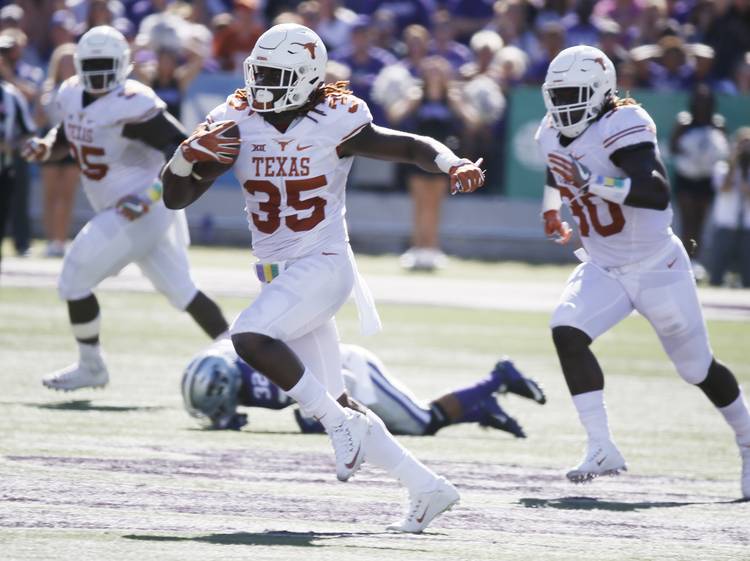 MANHATTAN, Kan. — For Edwin Freeman, an interception and a fumble recovery ended up being a consolation prize.

Texs forced three turnovers in its 24-21 loss to Kansas State on Saturday. Freeman recorded his first career interception and his first career fumble recovery, but he wasn’t in the mood to celebrate afterward at Bill Snyder Family Stadium.

On the Wildcats’ first drive of the second half, Anthony Wheeler knocked the ball out of Charles Jones’ grasp just before Jones crossed the goal line. Dylan Haines recovered the fumble and Texas, after a replay review, had turned what should have been a 28-7 deficit into a turnover and touchback.

In the fourth quarter, Freeman picked off a Jesse Ertz pass and also corralled an Ertz fumble.

Freeman said he thought he would score as he was returning his interception, but his 33-yard return was halted by Ertz himself, who tackled Freeman at Kansas State’s 36.

“They played great,” Haines said about Freeman and Wheeler, both sophomores. “You look at those young guys up there, they’re finally taking that role to be those playmakers and make those types of plays. We just need more of that.”

Texas, though, was unable to capitalize on any of those turnovers. Dorian Leonard and Armanti Foreman missed opportunities to turn fourth-down passes into touchdowns following Wheeler’s forced fumble and Freeman’s interception. Trent Domingue missed a 35-yard field goal on the drive set up by Freeman’s recovery at the Texas 47.

“We had our opportunities,” receiver Devin Duvernay said. “Defense gave us what, three chances, and we just didn’t execute them well.”

Freeman complemented his turnovers with five tackles, and Wheeler finished with three. Fellow sophomore linebacker Malik Jefferson’s six tackles trailed only defensive tackle Poona Ford’s eight. Head coach Charlie Strong told reporters that any playing time missed by Jefferson in the second half was because of the team’s rotation and not his performance.

Texas surrendered 405 yards of offense, but 244 of them were in the first half. Texas held Kansas State to only a field goal in the second half.

Third and Longhorns: Inside Texas-Kansas State

Kansas State 24, Texas 21: Inconsistency leads to a loss, like ‘a broken record’