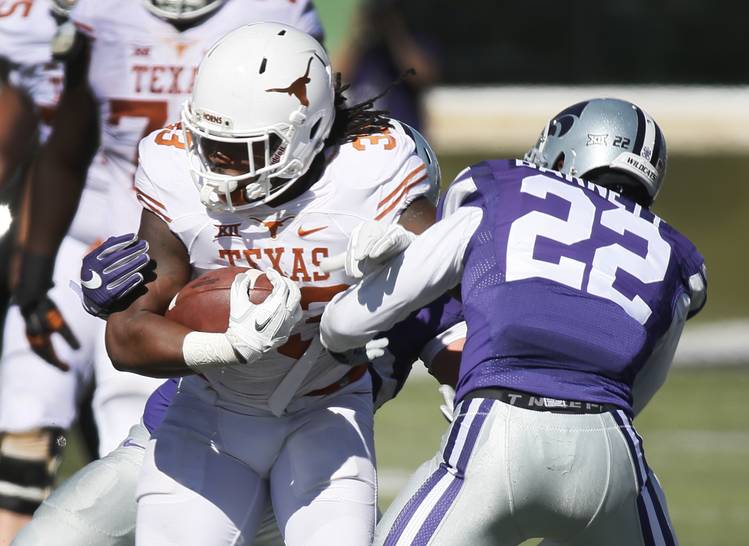 Foreman rushed for 124 yards in a 24-21 loss to Kansas State on Saturday, which gave the junior running back his eighth straight 100-yard performance. Already alone in second place in the Texas history books, Foreman is within three games of Campbell’s school mark. Texas, however, dropped to 3-5 in Foreman’s 100-yard games.

Kansas State was allowing a conference-low 90.3 rushing yards per game, and Foreman became only the third player to top 100 rushing yards against the Wildcats. As a team, Texas finished with 122 yards on 38 attempts.

Foreman earned 24 carries on Saturday, and he also had a 20-yard reception. Freshman Kyle Porter’s one first-quarter touch was the only other rushing attempt that wasn’t recorded by a Texas quarterback.

Ertz vs. Bonney: While certainly not its worst effort of the season — Cal’s Davis Webb, Oklahoma State’s Mason Rudolph and Oklahoma’s Baker Mayfield can fight for that distinction — Texas’ secondary was beaten by an efficient effort by Kansas State quarterback Jesse Ertz.

Ertz had suffered a shoulder injury in last week’s 38-17 loss to Oklahoma, and he was ranked last among the Big 12’s starting quarterbacks in passing yards per game and passing efficiency. Ertz completed 20 of his 27 passes on Saturday, though, and he finished with 171 yards and a touchdown.

Ertz also rushed for 78 yards, and he accounted for Kansas State’s two other touchdowns on the ground.

“I don’t know so much if (we made him look like) an All-American,” Texas coach Charlie Strong said. “He made some throws and they made some catches.”

Ertz’s touchdown pass was an 8-yard strike to Byron Pringle in the first half’s waning seconds, which helped the Wildcats respond to Texas freshman Devin Duvernay’s 80-yard score. Lined up on the outside for a first-down play, Pringle side-stepped sophomore cornerback John Bonney and leaped for the reception. Bonney tackled Pringle in the end zone, but he had no play on the ball.

Bonney also missed a key tackle on Ertz’s 19-yard touchdown run at the beginning of the quarter.

Top target: Freshman Collin Johnson caught a team-high four footballs on Saturday, but he only mustered 22 receiving yards. Texas, in fact, had four players who grabbed at least two footballs, but none of those players recorded more than 27 yards.

Johnson because the seventh player to lead or share the team lead in receptions this season.

Odds and ends: Kansas State had 52,328 fans show up for its homecoming game, which was the second-biggest crowd that Texas has seen in a true road game this fall. Oklahoma State announced a crowd of 53,468 for its 49-31 win in Stillwater on Oct. 1. … Duvernay has caught a touchdown in each of the last three weeks, and those three scores have covered 218 yards. Saturday’s touchdown catch and last week’s 75-yard score against Iowa State are Texas’ two longest plays this year. … An 8-yard touchdown run by quarterback Tyrone Swoopes was Texas’ 17th score out of the “18 Wheeler” package.

Kansas State 24, Texas 21: Inconsistency leads to a loss, like ‘a broken record’