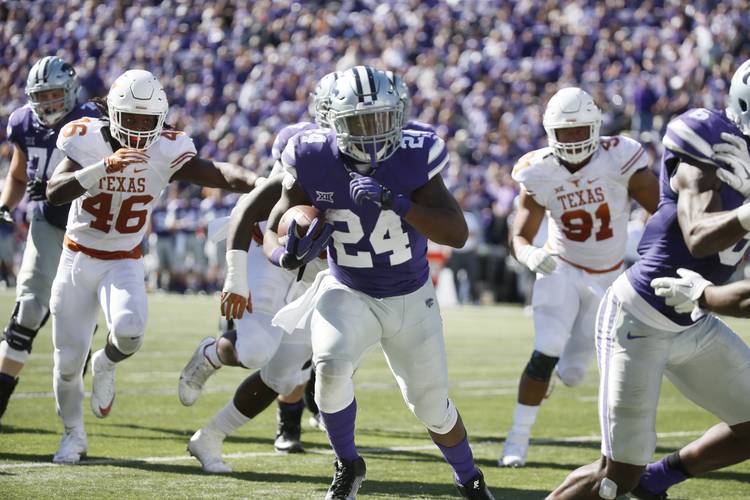 On Saturday morning, we asked four questions about the Texas-Kansas State matchup.

No. And now it’s trending downward.

Wasn’t offense supposed to be Kansas State’s weakness? Not so much on Saturday. The Wildcats had been held to 20 points in two of their last three games, but put up 21 in the first half alone. Such is life when you’re a Big 12 offense going up against the Longhorns, at least so far. The Longhorns did force three turnovers, and they did pretty much shut the Wildcats down in the second half, but the slow start and sloppy tackling efforts of the first half were both too much to overcome and also hard to believe. Kind of, anyway. Whatever defensive momentum was gained after the Iowa State win isn’t there anymore.

Texas’ freshman center, who was injured against Iowa State, wasn’t able to bounce back in time for the Wildcats. That’s too bad. The one-time Kansas State commitment from Belton has been playing well. Jake McMillon handled center duties, and a botched shotgun snap on third down really put Texas into a bad hole in the fourth quarter. It’s the fifth different starting lineup the Longhorns have fielded this season, and now left guard Patrick Vahe is the only lineman who’s started every game. Texas, which had been allowing two sacks per game, gave up three on Saturday.

3. WHO WAS TEXAS’ TOP RECEIVER?

The freshman is on a real tear — three big touchdown catches in his last three games: a 63-yarder against Oklahoma, a 75-yarder against Iowa State and an 80-yarder in Manhattan. His big play Saturday is the longest play of the season for Texas. And it knocked off his 75-yarder against the Cyclones, which was the Longhorns’ previous longest play. Technically, Collin Johnson, with his four catches for 22 yards, led the team in receptions. That means in seven games, seven receivers — John Burt, Jacorey Warrick, Jake Oliver, Jerrod Heard, Armanti Foreman, Dorian Leonard and now Johnson — each have either led or shared the team lead in catches.

4. DID TEXAS WIN AWAY FROM ROYAL-MEMORIAL STADIUM?

The Longhorns are 3-0 at home but now 0-4 when they play away from DKR. Texas hasn’t won in Manhattan in 16 years and has now dropped six of their last seven true road games. And if you throw in the five neutral-site games (Texas vs. Oklahoma at the Cotton Bowl, Texas-UCLA at AT&T Stadium and the Texas Bowl loss at NRG Stadium), and Texas is now 5-12 away from DKR in the Charlie Strong era. The good news: Next Saturday’s Baylor game is in Austin.

Third and Longhorns: Inside Texas-Kansas State