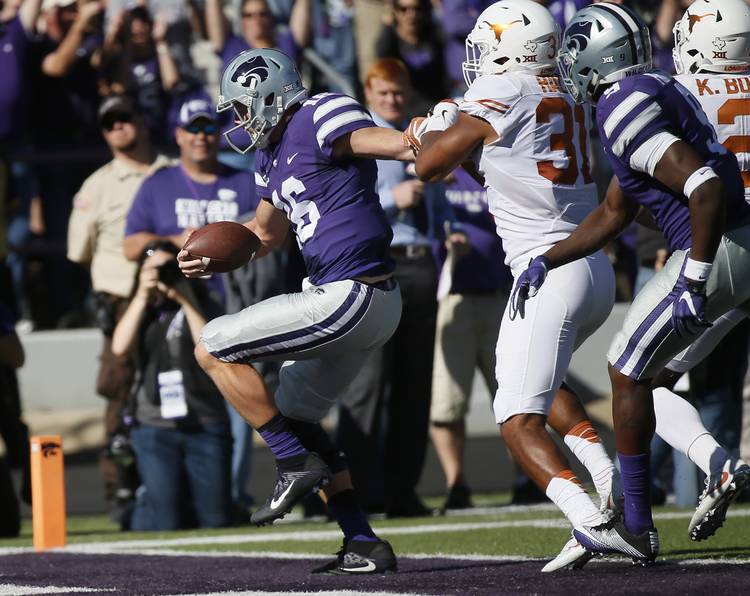 WHY TEXAS (3-4, 1-3) LOST: Well, it was a total team effort — offense, defense, even special teams. Yes, the defense forced three turnovers and pretty much shut the Wildcats down in the second half, but the slow, sluggish start lowlighted by missed tackles in the first half literally proved too much to overcome. Those three first-half scores came against one of the Big 12’s lower-rated offenses. And Texas’ offense, ironically enough, sputtered throughout, unable to maintain long drives and unable to hurt the Wildcats after forcing those turnovers. D’Onta Foreman had another 100-yard day and we saw an 80-yard quick-strike touchdown play and an 18-Wheeler touchdown run, yet the big takeaways were two critical dropped passes — one for a first down, the other for a touchdown — and questionable coaching moments in key situations. Pass on third-and-1 in the first half, really? And the defense somehow looked not ready to go on a big fourth-and-1 for Kansas State in the second half despite the fact that it came after a timeout. Trent Domingue’s missed 35-yard field goal with four minutes left really came into play late, when Texas’ last-minute touchdown still meant Texas had come up three points short. Another Manhattan setback.

WHY KANSAS STATE (4-3, 2-2) WON: Jesse Ertz had a big role in the win despite his two turnovers. He had a quarterback rating of 132.1, completing 20 of his 27 passes. But it was his impact running the ball — 18 carries for 78 yards, including those two first-quarter touchdowns — that hurt the most. The turnovers hurt, though Texas didn’t do much with them. One of them, however, did cost points when Charles Jones was stripped of the ball mere inches before he crossed the goal line. That alone would have turned 24-21 into 31-21. The Wildcats’ ability to sustain drives — there were two drives that lasted 16 and 11 plays, and three drives of nine plays — coupled with a defense that slowed the Longhorns down better than any other so far was enough to hold off for the win.

THE EYES OF TEXAS: … were on three specific Wildcats — linebacker Elijah Lee, the Big 12’s third-leading tackler who had recorded sacks in his previous two Texas-Kansas State matchups; defensive lineman Jordan Willis, who was nine sacks away from the Wildcats’ school record for a career; and wide receiver Byron Pringle, a double-threat as the Wildcats’ second leading receiver but also one of the Big 12’s most dangerous returner on kickoffs and punts.

Lee shared for the team lead in tackles, with seven. Six of those were solo stops.

Willis was the defensive player of the game, even with Edwin Freeman’s effort: His seven tackles shared for team-high with Lee, but he also had two sacks, three tackles for loss, one tipped pass and one forced fumble.

Pringle had four catches for 42 yards, including the lone touchdown pass for the Wildcats. And he had a nice 31-yard kickoff return.

Offense: Devin Duvernay. All he does is catch long touchdown passes. We can think of worse things to complain about.

Defense: Edwin Freeman. He was a turnover machine on Saturday, picking off an Ertz pass and later recovering an Ertz fumble.

(1) Foreman, who slipped into the No. 24 spot on UT’s career rushing list on Saturday, is only three 100-yard games away from Earl Campell’s school-record 11 set back in 1977. He had 24 carries for 124 yards, averaging 5.2 yards per run. And everyone, including the Wildcats, knew he was coming.

(2) In the last three games, Duvernay has produced a 63-yard catch against Oklahoma, a 75-yarder against Iowa State and an 80-yarder against Kansas State. All touchdowns that went a combined 218 yards.

(3) Say what you will about what this loss means for the season (Texas, three wins away from bowl eligibility, must find them against Baylor, Texas Tech, West Virginia, Kansas and TCU) or Charlie Strong’s job security. But at least the Longhorns fought back to make it an onside-kick game at the end. Remember, it was 14-0 at one point in the second quarter.

TEXCETERA: Texas fell to 7-10 all time against Kansas State, including a 1-7 mark in Manhattan. Texas is 3-0 at home, but 0-4 away from Royal-Memorial Stadium. … It was a day of firsts for Freeman: First career interception, first career fumble recovery. … Speaking of Foreman and streaks, his string of consecutive games with a touchdown ended at seven.

ON DECK: BAYLOR (Oct. 29, 2:30 p.m., TV TBA): The good news is that this game will be played at Royal-Memorial Stadium, where the Longhorns are 3-0 this season. The bad news is that we’re back to the days of wondering which Texas team will show up. It’ll be another big defensive test for the defensive-challenged Longhorns.