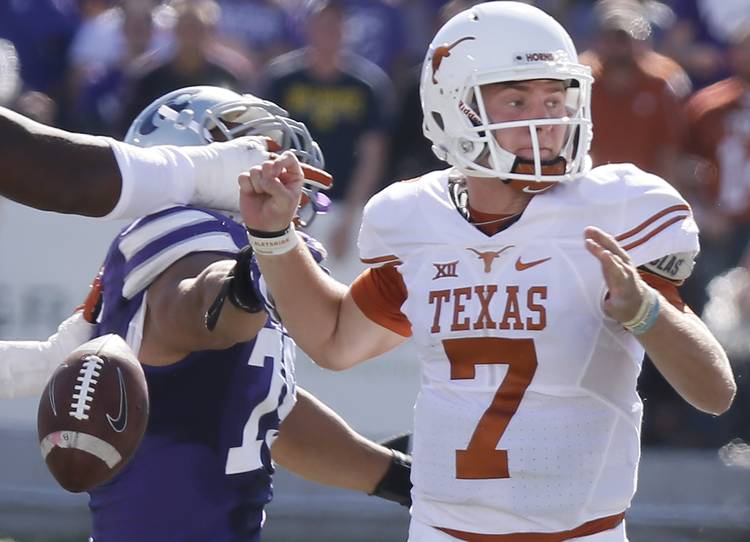 “That doesn’t concern me at all,” Strong said, noting there are still five games left in the regular season. “When you have youth, young guys, they’re going to fight. They’re not going to give in.”

For the third straight year, Texas sits 3-4 after seven games. The Horns finished with losing records in 2014 and 2015. Getting to a bowl game is still possible here in a year when fans expected so, so much more. So did the coach himself.

But whatever safety net Strong had is now probably gone after a 24-21 loss against Kansas State at Bill Snyder Family Stadium on Saturday. Texas is 1-3 in Big 12 play heading into a rugged showdown against rival No. 8 Baylor (6-0, 3-0) at Royal-Memorial Stadium.

“We’ve just got to find ways to make plays,” said running back D’Onta Foreman, who is making a bunch of them. Foreman posted his eighth straight 100-yard game, which leads the nation, and is now three shy of Earl Campbell’s school record. He’s still the nation’s third-leading rusher with 142.5 yards per game.

Texas posted season lows in points (21), total yards (344) and number of plays (62). The Horns were 3 of 11 on third down and had two critical fourth-down drops on plays that might have resulted in touchdowns.

“Every play, you have to have everybody doing the right job, the right thing,” quarterback Shane Buechele said. “Ultimately, when that happens, you execute. Everybody has to be on the right page.”

Give Kansas State credit, though. The Wildcats kept the ball 38 minutes, 27 seconds with a crackerjack X-and-O game plan.

Quarterback Jesse Ertz, who completes about half of his passes, connected on 20 of 27 for 171 yards. Ertz completed quick screens out wide, and K-State’s receivers made some terrific blocks. Ertz also ran for 78 yards and scored twice, even with a bad shoulder.

Texas coaches started John Bonney and Kris Boyd at corner for the second consecutive game. Both struggled, but Ertz relished going after Bonney. The sophomore was flagged for pass interference when Ertz tried to hit Corey Sutton down the sideline. Then Bonney looked helpless as Byron Pringle caught an 8-yard touchdown pass just before halftime.

The Longhorns are 0-15 under Strong whenever the team falls behind by 14 points or more. That shows a lack of resiliency.

The Horns are 1-7 in true road games since the start of 2015. That shows a lack of focus away from home.

Both are emblematic of a mediocre program.

“I can’t let the young guys see me with my head down,” said Boyette, one of 12 seniors. “I’ve got to be positive. I’ve got be compassionate. I’ve got to be competitive. It falls back on senior leadership, too, and I’ll take the blame for that. This is my team. If I’ve got to step up and be more vocal, I can do that, too.”

Defensive tackles Poona Ford and Boyette combined for 13 tackles, two for loss, against the Wildcats. Sandwiched between the two was linebacker Malik Jefferson, who had six tackles but appeared to get benched in the second half.

Strong said Jefferson wasn’t benched, only that Edwin Freeman and Anthony Wheeler were in a linebacker rotation.

Watching the dropped passes, missed tackles and penalties from the sideline must be infuriating for Strong. “We had just so many opportunities,” said the coach, who is 14-18 overall in three seasons.

He and the players appear to be out of answers.

As senior quarterback Tyrone Swoopes said, “If I knew, I would have told somebody and got it fixed.”