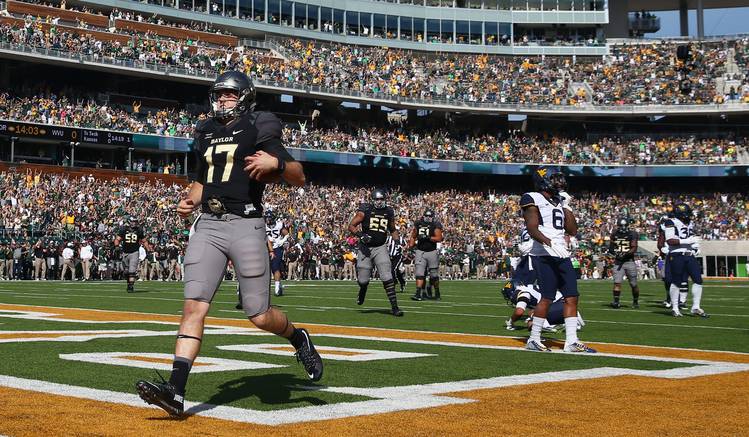 Was it that painful date? He didn’t know for sure. He paused a few seconds and said, “It’s past.”

Russell moved on. It’s a busy week for the fifth-year senior. His undefeated and eighth-ranked Bears play in Austin against Texas Saturday. It’ll be the first time Russell has played a game against the Longhorns. A year ago, he was on the sidelines, wearing a neck brace since he was five weeks removed from surgery.

Monday was the one-year anniversary of the hit that broke Russell’s neck. Late in Baylor’s homecoming game against Iowa State, he ducked his head and tried for extra yardage to convert a third down. Until that hit, he’d been a Heisman Trophy contender. Until that otherwise ordinary quarterback run, the Bears also were in the middle of the critical mix for one of four national playoff spots.

Flash forward 365 days. Baylor still is in the national championship conversation, but on offense, the Bears aren’t their overwhelming self. Baylor still is the highest ranked team in the Big 12, although the Bears have key road games remaining against Oklahoma and West Virginia and home dates with TCU and Kansas State. Baylor also will take on Texas Tech, Nov. 25, at AT&T Stadium in Arlington. The Longhorns might be the Bears’ easiest game left.

Russell has yet to show the form that made him one of the top players in the country last year. Baylor still sports a robust offense, averaging 549.2 yards and 43.7 points per game. But the Bears are only third-best in the explosive Big 12 in total offense and scoring, behind Tech (640.3 yards, 50.3 points) and Oklahoma (572.3 and 43.9).

There are many reasons as to why.

Bears coach Jim Grobe said Russell “was rusty” earlier in the season when Baylor didn’t blow out opponents in the opening halves. Instead, the offense kick-started in the third quarter in blowout wins over SMU and Rice and a tight victory over the Cyclones.

Russell is without his top receivers, including NFL first-rounder Corey Coleman, from a year ago, meaning this year’s raw group experienced some early growing pains. The Bears also lost four starters from last year’s offensive line.

Russell is completing only 57 percent of his passes and he’s averaging 245 passing yards a game, which is only seventh best in the league. But with only 177 attempts, he’s thrown significantly less than the six quarterbacks who rank ahead of him.

In Baylor’s last game — a 49-7 victory over Kansas — Russell played only the first half.

Grobe is pleased with Russell’s play.

Russell said he’s pleased with where he is now, as opposed to this time a year ago.

“This time last year I had a broken neck,” Russell quipped, “I’d say it was a little better.”

Some of Texas’ best are going through sophomore slumps