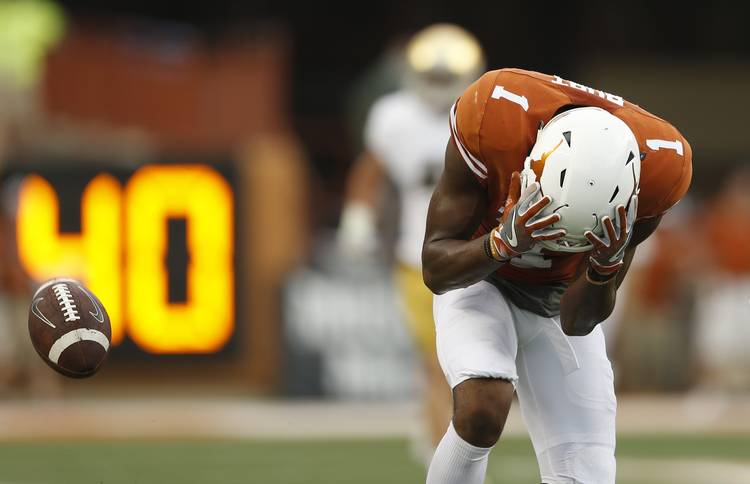 Malik Jefferson was an all-everything pick in August. The Texas linebacker was a preseason All-American and named to the Butkus, Bednarik and Nagurski watch lists.

Jefferson, who has 16 career starts, is still second on the team in tackles. But the state’s No. 1-rated recruit of 2015 simply hasn’t been the same dynamo that he was as a freshman.

Same goes for cornerback Davante Davis, a preseason All-Big 12 pick. This year, he’s made only eight tackles in seven games and was essentially benched. Fellow cornerback Holton Hill has started only twice this season after starting eight games in 2015. He’s got a pedestrian 14 tackles.

The Longhorns desperately need some of their better defensive players to shake free from whatever’s been holding them back. No. 8 Baylor (6-0, 3-0 Big 12) has every intention of kicking Texas whenever it can, including Saturday at Royal-Memorial Stadium.

Texas coach Charlie Strong said he does not believe those three specific players are regressing. In Jefferson’s case, Strong said others like linebackers Edwin Freeman and Tim Cole are playing better.

“It’s just there’s competition there,” Strong said, “and once you get into a beat where guys are playing good, you kind of stick with those guys.”

Jefferson appeared to get benched during Saturday’s 24-21 loss to Kansas State. That wasn’t the case, Strong said. Jefferson finished with six tackles, second-highest total on the team. Freeman had  five tackles and a key 33-yard interception return. Cole had a sack.

“I think he’s been hyped up since he came here,” Boyette said. “Malik is a human being. I love him to death, but he can’t put all the pressure on him. He can’t go out there and make every play, make every tackle. I think really he’s got to keep humbling himself. Everybody has to humble themselves first to be an outstanding football player.”

“I think it’s just a growing experience,” senior linebacker Tim Cole said. “As a freshman, you’re coming in here and there’s not too much pressure and you can just play. As a sophomore, I guess expectations are higher and you’ve got to elevate you game and be better than you were the year before.

“It’s a combination of those things and people are going to scheme for you,” Cole added. “You have to get back down to basics.”

Jefferson, Davis and Hill aren’t the only ones struggling. Sophomore corner John Bonney gave up several key plays against Kansas State. Sophomore P.J. Locke had a sack in the opener against Notre Dame and 18 tackles for the season.

On offense, sophomore receiver John Burt struggled with hand and hip injuries and straight-up drops. Burt has 16 receptions this season while Dorian Leonard has more receiving yards and touchdowns.

“Man, it’s just one of those things where you have to take coaching and take it upon yourself t go get that extra work either on the field or in the film room to get ready and get back to your normal self,” Leonard said.

“My first couple of years, I took that hard,” he added. “When you know that you’re not yourself, you go out and work on your game. Even if it’s after practice, you go get a couple extra routes after practice, like I did. And you just hope it carries over to the game.”

One year later, Baylor’s Seth Russell has moved on from his 2015 neck injury