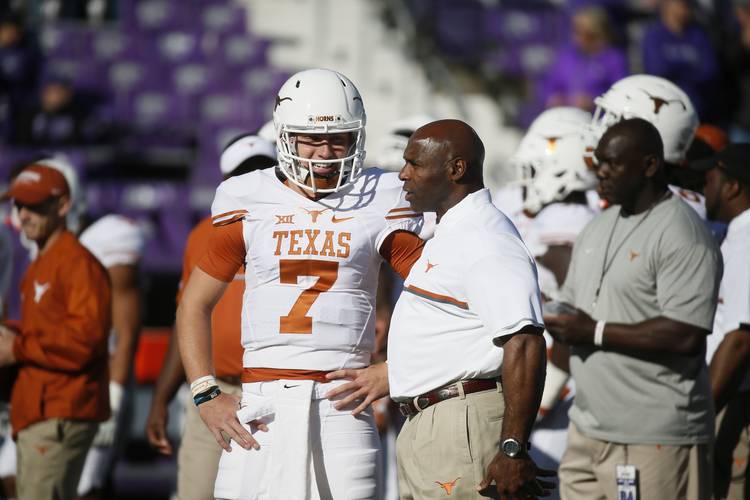 The 36.1 points per game scored by Texas ranks 28th in the nation, and the Longhorns have put 253 points on the scoreboard this fall.

Only three of those points have been set up by a turnover, though.

“If the defense (gets a turnover), we need to reaffirm that we we’ll be able to score off of turnovers to give them confidence,” offensive lineman Connor Williams said. “It’s an issue that we need to work on. We definitely need to score after turnovers. It’s a problem.”

After a horrendous start to the season, the Texas defense has forced eight turnovers over its last three games. The Texas offense, however, has only been able to turn those gifts into a 28-yard field goal against Oklahoma. (Dylan Haines set that scoring drive up with an interception return to the Sooner 13).

This is mind-boggling. The UT offense's production after a turnover: 3 points on 9 takeaways.

For argument’s sake, let’s toss out a fumble that was recovered with nine seconds left in a 27-6 win over Iowa State on Oct. 15. On three of the remaining eight post-turnover possessions, a Texas team averaging 477.6 yards per game has lost yardage. Texas has also turned turnovers into three different drives inside of an opponent’s 30, but those possessions were spoiled by an interception, a failed fourth-down conversion and a missed field goal.

Texas won the turnover battle against Oklahoma by a score of 4-2 on Oct. 8, and the Longhorns pitched a 3-0 turnover-themed shutout of Kansas State this past weekend. They lost those games, though, by a total of eight points.

“It’s just goes down to execution,” said Texas quarterback Shane Buechele, who is 11-of-19 for 80 yards, an interception and five sacks in post-turnover drives. “Whenever the defense gives us the ball, we just have to go out and run our offense. Just go out and run with tempo and just try to convert what they give us.”

This week, Texas will battle a Baylor team that has committed eight turnovers this season. Opponents have turned those miscues into seven points.

Some of Texas’ best are going through sophomore slumps