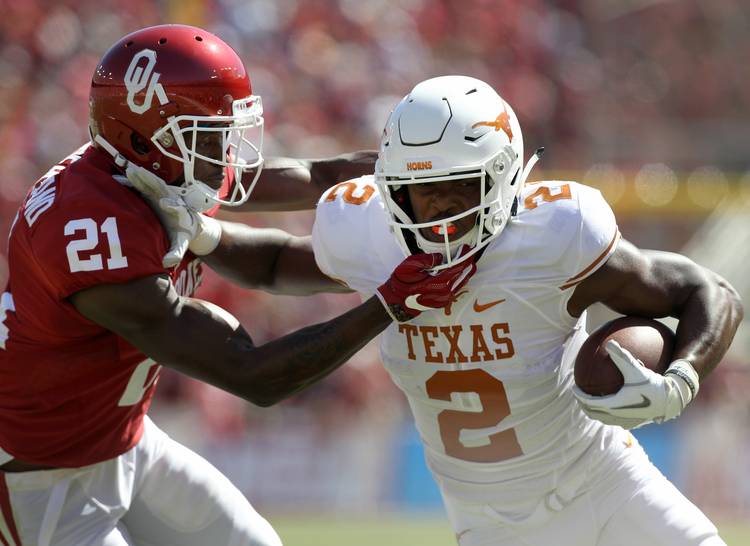 OU safety Will Sunderland grabs the facemark of UT wide receiver Devin Duvernay in the second quarter at the Cotton Bowl in Dallas, Saturday, Oct. 8, 2016. (Stephen Spillman / for American-Statesman)

Devin Duvernay can only remember one race — run during his junior year of high school — that he lost.

Objectors are free to come forward with receipts. Duvernay, though, won gold at the 2015 state track meet when he was clocked at 10.27 seconds in the 100-meter dash. There probably aren’t many defensive backs who can refute the Texas freshman receiver’s claims, either.

Perhaps Jerrod Heard, who has petitioned for the title as the fastest man in the Texas locker room, should take notice. It might be wise if Sheroid Evans, who has boasted that his hand-picked group of defensive backs could beat a quartet of receivers in a relay race, stood down.

“I don’t know what constitutes world-class speed, but he’s got plenty of it,” said Mark Behrens, Duvernay’s football coach at Sachse High. “He’s not a track guy playing football, he’s a football player with track speed.”

Six months ago, it was presumed that these debates about Duvernay’s speed would be held on Baylor’s campus. But with the Bears set to come to town this weekend, here we are.

In May, Baylor fired head coach Art Briles in the midst of a sexual assault scandal that involved the school’s football team. A report by the Pepper Hamilton law firm concluded that allegations against athletes had not been properly handled by the football coaches.

Since 2014, two Baylor football players — Sam Ukwuachu and Tevin Elliott — have been convicted of sexual assault, while another — Shawn Oakman — is awaiting trial. Multiple lawsuits have since been filed against Baylor, and it was reported last week that the U.S. Department of Education for Civil Rights was investigating to determine whether the university violated Title IX laws.

Duvernay was a member of Baylor’s 2016 recruiting class. But with Briles exiled from Waco, Duvernay and six and his fellow freshmen left the program.

“I just had my mindset on playing with (Briles) and his staff,” Duvernay said last week. “Hearing that they’d be all gone and not knowing what would happen, if there’d be any bowl sanctions or any penalties, I just wanted to be safe and get out.”

An error with Duvernay’s paperwork allowed the four-star recruit to search for a new team without any eligibility restrictions, although Baylor eventually released five additional freshmen from their letters of intent. Donovan Duvernay, a defensive back and Devin’s twin, was one of those five freshmen.

With Duvernay back on the market, Texas pounced.

Devin and Donovan Duvernay decided to join Texas’ football program, which made Devin the highest-rated player to sign with the Longhorns in 2016. Ex-Baylor linemen Patrick Hudson and J.P. Urquidez also joined the twins in Austin.

Duvernay didn’t arrive on campus until July, but wideouts Dorian Leonard and Jacorey Warrick said the soft-spoken speedster picked up the playbook quickly.

“I’ve transitioned well even though I came here late,” Duvernay said. “I found the offense was great to me, (and) it’s not too hard to learn, so I feel like I fit in great.”

Still, it was a slow start to the season for the 5-11, 195-pound freshman. He was held without a catch in the first two games, home wins over Notre Dame and UTEP, and he had only two catches through the first four games. Then came a 63-yard touchdown catch against Oklahoma, and he earned the Big 12’s newcomer of the week award thanks to a 75-yard score against Iowa State the following week. In last week’s 24-21 loss at Kansas State, Duvernay turned his one target into an 80-yard touchdown.

The 80 and 75-yard catches are Texas’ two longest plays this season, and that 63-yard score ranks fifth. Already established as a home run hitter, Duvernay — according to his quarterback — can also hit singles and doubles.

“He does have that vertical threat and we like it, so we’re going to use that,” Buechele said. “He is a good possession guy, too. He’ll catch a ball for five, six yards and get some yards after the catch. He’s a great overall receiver.”

Duvernay’s short-lived Baylor past will visit his long-term Texas future on Saturday, but he has downplayed the reunion. The nation’s sixth-best pass defense (160.8 yards per game), though, knows it needs to keep any eye on a player it once expected to have for its offense.

“We didn’t miss on that guy,” Baylor coach Jim Grobe said. “We thought that he was really, really special and he proved that to us. When you watch him run by people, it makes your heart skip a little bit knowing you have to go defend that guy.”

A running back when he entered high school, Duvernay was moved to the slot before his sophomore season since Devine Ozigbo, who is at Nebraska, was already in Sachse’s backfield. Behrens said Duvernay needed a couple of days to adapt to catching footballs, but couldn’t recall a dropped pass after the third day of spring drills.

Years later, Duvernay is a wide receiver who confidently told media members that no defensive back — not even his twin brother — could cover him.

Duvernay has recorded a team-high 273 receiving yards, and he is tied with Heard and Leonard for the Longhorn lead in touchdown catches. That damage has been done on only 10 catches, which ranks eighth in Texas’ deep receiving corps. Duvernay is also averaging 21.4 yards per kickoff return.

“I think he’s a superstar in the making,” Warrick said.

Baylor saw seven recruits from its 2016 signing class leave the program in the wake of the sexual assault scandal. Where are they now?

One year later, Baylor’s Seth Russell has moved on from his 2015 neck injury