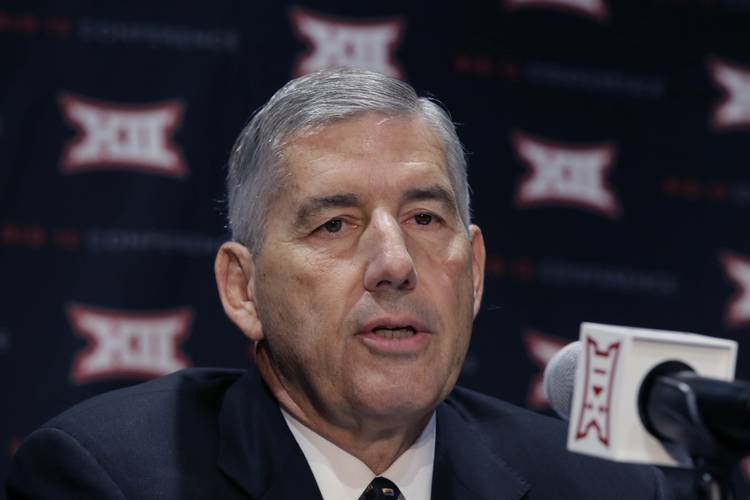 On Oct. 17, the league announced it was standing pat with its 10-team configuration. While no expansion angered some in places like Houston and Cincinnati, Bowlsby called it a “very thorough process.”

“The board didn’t make the decision that some thought they were going to make,” Bowlsby said. “But it wasn’t because they didn’t have ample information or hadn’t done thorough research or hadn’t had thorough conversations. So I think the process was a good process for us.”

The league’s current TV contracts run through the 2024-25 athletic year. Bowlsby argued that with no TV networks wanting to extend the current deals, there’s no reason to ask members for an extension of their grant of rights. “No reason to ask for one, no reason to expect one,” Bowlsby said.

However, that’s re-framing the debate to a certain extent. Texas officials were not willing to discuss an extension of the grant of rights in order to keep all options open, university sources have told the American-Statesman.

As of now, the Longhorns are not willing to bind themselves to the Big 12 any longer than they must contractually.

Rough and tumble: The Big 12’s biggest enforcer, Baylor’s Rico Gathers, is now catching passes with the Dallas Cowboys. Football has changed his body, too. Gathers went over to former teammate Ishmail Wainright’s house, and the 6-5 senior couldn’t believe his eyes.

“I’m used to Rico, but I wasn’t used to that Rico,” Wainright said with a laugh.

Wainright and 6-10 junior Johnathan Motley must serve as the Bears’ frontcourt intimidators this season. Together they combined for 58 blocks last year for a Baylor squad that went 22-12.

Ross was an honorable mention all-Big 12 pick last season as the Red Raiders with a career-high 10.3 points per game as a reserve. Now he’ll be expected to lead Tech under a first-year head coach but one who logged 10 years as an assistant in Lubbock.

“It think his loyalty to Texas Tech and the program, it needs to be paid back,” Beard said. “If there’s any justice, Aaron Ross is going to have a good year.”

Shepherd, who has been to Big 12 media day three times, has logged 92 games so far with the Horned Frogs. Forte, who has played in 102 career games, missed last season with an elbow injury. Both are now playing for new coaches.

“I’ve seen a lot, man,” Shepherd said. “I just takeaway friendships and partnerships with the coaches and the staff that surrounds them. It’s awesome to build those types of relationships.”

D’Onta Foreman keeps running as Texas searches for a sidekick