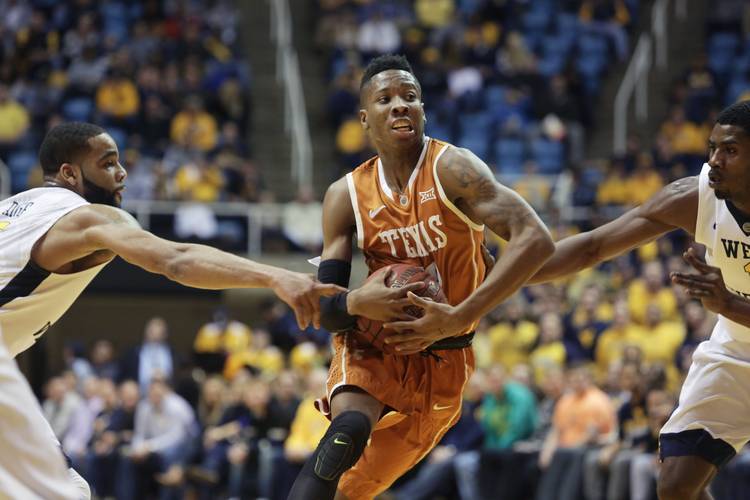 “The young guys come up to us and ask, ‘What should I do here? How should I guard the screen?,’” Davis said. “Just six months ago, I was in his shoes and now I’m telling him how to do it. It’s funny, but crazy at the same time.”

Davis said this happens every day. Same for Roach, who just turned 20.

Texas coach Shaka Smart’s first team was loaded with seniors. His second bunch is a group of pups. Granted, these are acrobatic high-flyers who soared over high school competition. But they’re a bunch of college freshmen nonetheless. Davis and Roach are the Longhorns’ leaders by default.

In fact, there were 33 players at Big 12 men’s basketball media day on Tuesday inside the Sprint Center. Davis, Roach and Oklahoma State’s Jawun Evans were the only sophomores in attendance. Everyone else was either a junior or senior.

Texas’ youth movement even surprises the coach every now and again. During Monday’s practice, Smart wanted the young guards to pair up and face the veterans. “Then I looked out there and realized there’s two freshman guards against two sophomore guards,” Smart said.

Smart’s two sophomores laugh off all those questions and answer them with patience, same as now-departed veterans Javan Felix, Isaiah Taylor and others did last year. These Longhorns are going to need all of their newcomers to play and contribute substantially.

Roach, Davis and Jones likely will be the team’s primary ball-handing guards. So far, Young might be more of a shooting guard, although Smart prefers his guards to be interchangeable on the perimeter.

“We’re going to have to play point guard by committee,” Smart said, “and that’ll be interesting to follow.”

And there’s the “Fro Bros” — the frontcourt duo of James Banks and Jarrett Allen. Banks, a 6-10 center from Decatur, Ga., was one of the top 50 recruits in the nation. Allen was a five-star McDonald’s All-American from St. Stephen’s.

Smart said Allen is “a phenomenal player and only getting better and better.”

At this point, Smart said the Horns haven’t put in many plays. They’re studying concepts mostly. After all, no sense worrying about specific plays if you can’t do the basics.

“I’m a Cubs fan,” Smart said, dropping any pretense of who he’s rooting for during the World Series. “I showed the guys some clips of guys hitting singles. And those singles were big-time plays in games that won the team’s big games.

“That’s my message to Andrew Jones to Jacob Young, to Eric and (Roach),” he added. “Just hit a single, man. You don’t have to hit a home run on every play. If you swing for the fences, a lot of times you’re going to strike out.”

Roach, who goes by “Snoop,” had a typical up-and-down freshman season. He started slow, notching a few double-digit games along the way. He finally broke out for 22 points against TCU, but then drifted back from center stage. His best night came at Oklahoma State, where he scored all 15 points after halftime and carried Texas to a 62-50 win.

Roach finished the year averaging 7.5 points per game and shooting 45.3 percent from the floor.

Things clicked for Davis in the second round of league play. He had double-digit games against West Virginia, Baylor, Kansas State and Oklahoma and then went 5 for 8 from the floor against Northern Iowa in the NCAA Tournament.

Davis shot 38.2 percent from 3-point range and had the right amount of nastiness, something Smart wished last year’s seniors had.

Davis’ advice to the freshmen is what he wishes somebody would have told him. “When something didn’t go my way, just go on to the next play. Just forget about it,” he said.

Smart talks about handling adversity all the time. “He said it, but it didn’t really settle in until the end of the season,” Davis said. By then, his first year was already over.

Roach and Davis are determined to make even greater leaps this season. Only now, they’ve got younger eyes watching, too.

“We still have some things we’ve got to learn. We know that,” Roach said. “But from what they’re asking us and what we already know from our freshman season, we’re trying to help our freshmen be better prepared.”