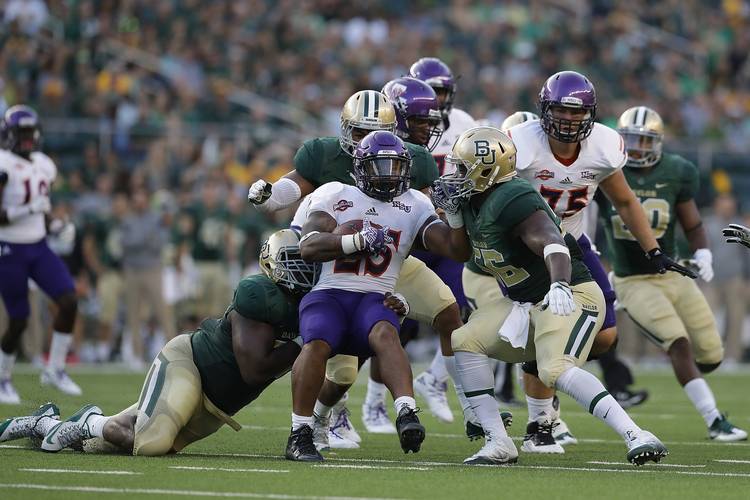 De'Mard Llorens #25 of the Northwestern State Demons is tackled by the Baylor Bears at McLane Stadium on September 2, 2016 in Waco, Texas. (Photo by Ronald Martinez/Getty Images)

WACO — The Baylor Bears are undefeated and nationally relevant because of the excellent play of their defense.

Sure, Baylor still is dynamic on offense. That’s as automatic as sweating through a Texas summer. The Bears’ up-tempo mix of run and pass is the trendiest offense in the country. Even Texas, which hosts Baylor this Saturday, hired offensive coordinator Sterlin Gilbert in the offseason to install a version of the Baylor brand.

But it’s Baylor’s defense, which is tops in the Big 12, that has proven to be the most significant surprise of the league, especially considering the Bears were forced to change to a 3-4 scheme because they had so few linemen.

“I think we’re a lot better,” said Bears linebacker Aiavion Edwards. “I don’t think many people would give us a chance entering the season, but we’ve proven a lot to ourselves and a lot of people. We continue to just impress ourselves. We have a lot of room to grow, but as of now we’re playing well.”

Baylor ranks in the top 10 nationally in pass defense and turnover margin. The Bears are 11th in the country in scoring defense, allowing only 17.2 points per game.

This reflects the fact Baylor has yet to give up a point in the fourth quarter this season. North Carolina was the last team to scratch the scoreboard in the fourth quarter against the Bears; the Tar Heels got a trash touchdown with just under three minutes to play in last year’s Russell Athletic Bowl to whittle Baylor’s winning margin to 11 points.

The offense also is helping the defensive cause. Baylor can be quick-striking with its deep pass plays, but more often the Bears have turned to the running game. The rushing game sustains drives and keeps the defense well rested. Baylor averages 282 rushing yards a game.

Iowa State has been the lone team to rough up the Bears defense this season. The Cyclones, playing at home, built a 42-28 lead through three quarters. As the Bears’ offense swirled out of its funk in the fourth quarter, the defense allowed no first downs and a collective seven yards on nine plays.

Baylor coach Jim Grobe has been a defensive guy his entire career. Since he was hired as Baylor’s acting coach in June, there was little time for Grobe to influence much in the way of scheme. The Bears already had switched to the 3-4 in spring workouts as they dealt with losing their entire defensive line to graduation or the NFL. Baylor’s most talented players are in its secondary and among the linebackers.

“We know that if this defense wants to be any part of good, it’s going to start with us,” said cornerback Ryan Reid, who picked off two passes in his last game. “We just have to buckle down and get our heads right.”

Now, it also must be pointed out that Baylor hasn’t played the toughest schedule. Its most impressive performance came in a 38-24 victory over Oklahoma State. The defense recovered three fumbles with an interception.

Baylor ranks first or second in five major defensive categories in the Big 12. How the Bears rate both in the conference and in the country:

Sterlin Gilbert an asset as Texas defense prepares for Baylor

No. 2 Texas sweeps Oklahoma ahead of match-up with No. 6 Kansas