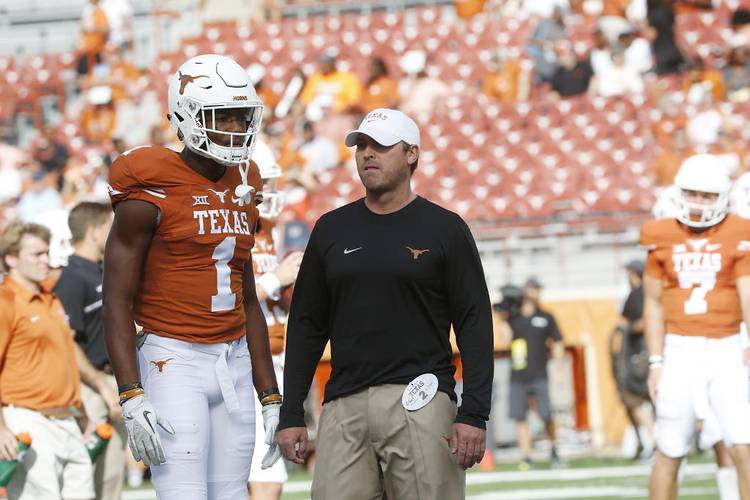 Offensive and quarterback coach Sterlin Gilbert and #1 John Burt on the field during pregame warmups before the Longhorn's game against UTEP Saturday September 10, 2016 in Austin. Rodolfo Gonzalez/AMERICAN-STATESMAN

As Texas schemes this week for a Baylor team that ranks 10th among the nation’s 128 FBS teams in scoring (43.7 points per game) and fourth in total offense (549.2 yards per game), the Longhorn defense may have a secret weapon in its offensive meeting rooms.

Texas offensive coordinator Sterlin Gilbert has loose ties to Baylor as he worked under ex-Bear coach Art Briles at Houston in 2005. Gilbert was also an offensive coordinator for Briles disciples Dino Babers (Eastern Illinois and Bowling Green) and Philip Montgomery (Tulsa). Gilbert’s connection to Briles and the Baylor system was chronicled in this past week’s Sports Illustrated.

Briles was fired from Baylor in May in the wake of a sexual assault scandal that involved some of his football players. Many of Briles’ former assistant coaches — one of which is his son, Kendal, who coordinates the Baylor offense — remain in Waco, though.

So is Gilbert also playing the role of defensive coordinator this week? No, but he does routinely talk with Texas’ defensive coaches.

“Week in and week out, we trade some ideas on both sides of the ball to see what schemes are best and how schemes are fit,” Gilbert told the media on Tuesday. “I think that falls into this week as well.”

Texas is scoring 36.1 points per game in its first year with Gilbert, and the offensive coordinator noted that he is part of a Briles-founded coaching tree that has branched out to several campuses. Baylor players have also noticed Texas’ success with a familiar-looking offense this season.

Texas Sure Is Running Our OFFENSE

D’Onta Foreman keeps running as Texas searches for a sidekick

Is Baylor’s defense legit? Texas will find out Saturday