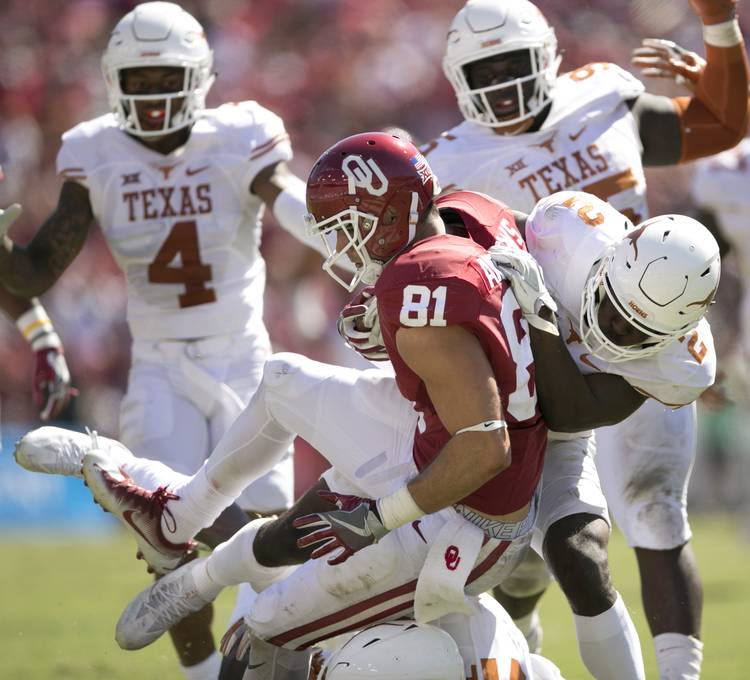 Ten is a number that you won’t find on the Texas roster; the school retired Vince Young’s No. 10 jersey in 2008. Texas freshman Devin Duvernay has only 10 catches this season, but he has turned in a team-high 273 receiving yards. Former Texas linebacker D.D. Lewis wore that number and recovered a school-record 10 fumbles from 1998-2001.

Ten also accounts for the Texas defense’s rank in passing efficiency in the Big 12. Out of 10 teams.

“I’m not going to put a letter grade on it,” senior safety Dylan Haines said. “We’re just not consistent, and I think that’s been the downfall of the secondary this year. I think we have good enough athletes to play good in the Big 12, and to go out and make plays. We’ve done that in sporadic moments. I think overall, we’re just really inconsistent.”

How does one calculate passing efficiency? The NCAA formula is yards (x 8.4) + touchdowns (x 330) + completions (x 100) – interceptions (x 200). You then take that large number and divide it by the passing attempts.

Four teams in the Big 12 have allowed more passing yards than Texas, and both Oklahoma and Texas Tech have surrendered more touchdown passes. Texas, though, has been hurt by its lack of interceptions. The Longhorns also are allowing a conference-high 8.7 yards per pass attempt.

Things won’t get any easier for Texas’ secondary. West Virginia (1,821 passing yards) and TCU (2,323 yards) await on the schedule. Texas Tech and its 3,799 passing yards — which lead the country’s second-best team by 849 yards — host the Longhorns next week.

“They’re high-powered passing offenses,” safety Jason Hall said. “Defensive backs, we’ve got to be on our Ps and Qs. We’ve got to stay on our game at all times.”

Baylor heads into Saturday’s game against Texas having thrown for 1,598 yards and 17 touchdowns, and the Bears rank sixth in the Big 12 with a passing efficiency of 147.4. (At 147.9, Texas is fifth). Head coach Charlie Strong, though, noted on Monday that the Longhorns also have to watch out for Baylor’s rushing attack that’s averaging a Big 12-best 282.8 yards per game.

Here is how Texas' passing defense stacks up against its nine contemporaries within the Big 12.

No. 2 Texas sweeps Oklahoma ahead of match-up with No. 6 Kansas