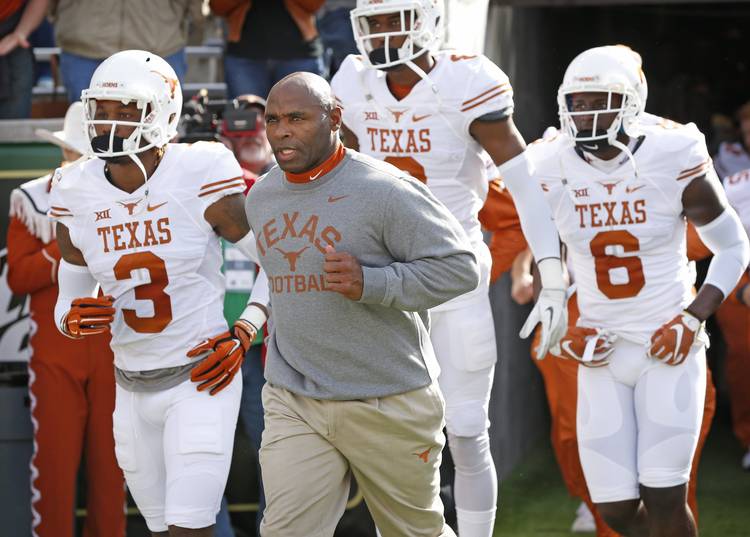 Texas coach Charlie Strong runs onto the field for the Baylor game at McLane Stadium in Waco on Saturday December 5, 2015. JAY JANNER / AMERICAN-STATESMAN

The University of Texas has never fired any coach of a major sport during the season in its 133-year history.

Some resigned, fed up with fan expectations. Billy Wasmund died unexpectedly six days before the 1911 season opener. But an outright mid-season firing has long been considered undignified for a program of this stature.

Barring a spectacular catastrophe, Charlie Strong won’t become the first. However, only the naive would remain oblivious to his plight. Things are trending in an ominous direction for Strong, who is 14-18 in two-plus seasons and currently 3-4 in a year were he desperately needs to show real progress.

Eighth-ranked Baylor is coming to Royal-Memorial Stadium on Saturday looking to unload months of frustration on one of its biggest rivals. Some Baylor fans believe that UT henchmen were responsible for former coach Art Briles’ undoing this summer. It’s dumb and wrong, but rivalries tend to get overheated.

“Obviously, we don’t have any effect on what goes on over there,” UT receiver Dorian Leonard said. “That’s just fans talking, trying to find someone to blame.”

“I hear people say that they’re angry at us a lot, but I really don’t pay attention to all of that stuff. I don’t,” UT guard Kent Perkins said.

Perkins remembers last year’s game in Waco got a little hot, too. Texas players thought cornerback Duke Thomas was thrown down too hard by Baylor’s Lynx Hawthorne after an interception. Impolite words were exchanged, and next thing anybody knew, the benches emptied for some extracurricular activities.

“Of course, yeah,” Perkins said. “I remember last year, there was almost a fight. That tension was crazy. It just took one person to say one thing, and you could see how it just ticked off everybody.”

At the time, Texas had a 17-0 lead after the first quarter that ballooned to 20-0 by halftime.

Baylor came storming back after the break even without its third-string quarterback. The Bears’ first drive of the third quarter was abysmal for the Horns. Using nothing but a wildcat formation, Baylor drove 69 yards in eight plays and scored.

A wild second half started to unfold, and Baylor simply ran out of time. Texas captured a 23-17 win and finished the season with a 5-7 record.

“I think we didn’t have nothing to lose last year. It was that simple,” UT defensive tackle Paul Boyette Jr. said. “We knew going in that we might as well give it our all. It was our last game of the season, and this was our bowl game. We’re not going to hold anything back. Everybody just cut loose and have fun.”

That’s smart advice this year, too.

Strong, still well liked personally inside the UT administration, is fighting for his coaching life. The Longhorns must win three of their last five regular-season games to become bowl-eligible. The team’s current situation seemed unfathomable back on Sept. 4 when unranked Texas knocked off then-No. 10 Notre Dame.

But the Horns have lost four of their last five games. None have been blowouts, per se, but there have been plenty of mistakes in all three phases.

A wide array of UT administrators, key donors and fans will attend Saturday’s game. There are various non-athletic events scheduled around campus this weekend. Football is what brings everyone together, so there will be plenty of discussion about the current state of affairs.

The American-Statesman has reported that UT President Gregory L. Fenves will ultimately have the final say on whether Strong returns in 2017 or not. Strong currently has two years, $10.7 million left on a guaranteed contract. Most of the assistant coaches also have guaranteed deals that run through the 2018 season.

“Don’t have nothing to lose this year, because it’s a one-game season,” Boyette said. “The only thing you can lose is just your mind really.”

Speaking for UT’s 12 seniors, Boyette said he’s given his “blood, sweat, tears and heart to this university.” He’s not going to give up on the team or the coaching staff.

“I’ve never been a quitter my whole life, so I’m not going to give up on anything,” Boyette said. “We still have five games to go out there and get this program turned around. There’s no excuses about why we can’t get the job done.”

Q&A with a Baylor beat writer: ‘We’ll get a glimpse of how good the Bears actually are’