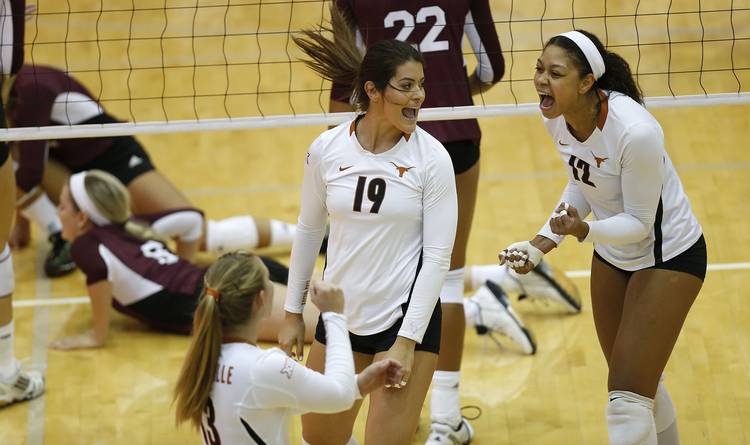 They used to call her Scooter Girl.

Four years ago, Paulina Prieto Cerame found herself rehabbing a leg injury during her freshman year at Penn State. She couldn’t walk for 10 months, so she used her healthy leg to pedal around campus on a scooter.

Unable to complete on a volleyball court, Prieto Cerame challenged herself by seeing how fast she could scoot — “My wheels actually turned square,” she recalled. Penn State students began calling her “Scooter Girl,” and her scooter even earned her a radio interview.

Now a senior at Texas, Prieto Cerame still rides a scooter. She bought an electronic one after someone ran into her car last year while she was Christmas shopping. The scooter, though, is no longer Prieto Cerame’s calling card. In fact, one of her Texas teammates said she’s best described as a firecracker.

Prieto Cerame, a 6-2 outside hitter, is hitting .284 this season while averaging 3.51 kills per set. An all-Big 12 honoree in 2015, she ranks seventh in the conference in kills.

Prieto Cerame is joined by setters Chloe Collins and Nicole Dalton in Texas’ senior class, but the offense has been fueled by her contributions alongside White (4.31 kills per set) and junior Ebony Nwanebu (3.83 kills per set). Texas boasts the nation’s fourth-best hitting percentage, and the team is ranked second in the AVCA’s volleyball poll.

“We’re starting to give more and play for each other,” said Prieto Cerame, who registered a career-high 24 kills in a five-set win over Texas Tech on Oct. 21. “It’s starting to come along very nicely.”

A native of Puerto Rico who spent her teenage years in Miami, Prieto Cerame actually chose Penn State over Texas when she was a senior in 2011. She took a redshirt during that scooter-riding 2012 season, and was a role player on Penn State’s 2013 national championship team. She wasn’t happy, though.

Prieto Cerame felt like her involvement with the sport was stunting her growth off of it. She had stopped believing in herself, and her family and friends noticed a difference in her normally-cheerful demeanor.

So she made a “decision on a whim” and transferred to Texas just before the start of the 2014 season.

“I was in a very dark place when I first got here,” Prieto Cerame said. “To see that kind of Paulina to the Paulina that I am now, there’s not one person that can come to me and say why should I not come to Texas. I tell them there’s no reason why you shouldn’t come to Texas.”

Prieto Cerame, 22, has been playing volleyball since she was seven. When she left Penn State, however, she wasn’t sure if she’d continue playing after she graduated from college. Three years in Austin has revived her passion, though. Prieto Cerame will graduate in December with a degree in youth and community studies, and playing professionally in Europe will be an option. She might even give beach volleyball a try.