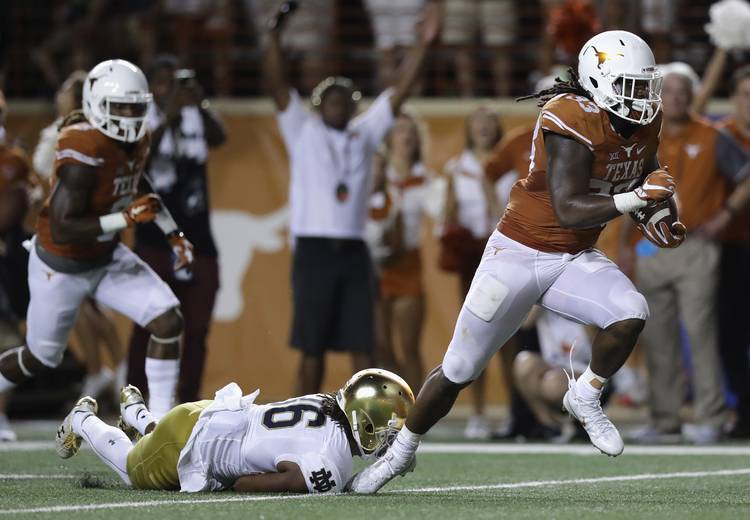 D'Onta Foreman (33) of the Texas Longhorns rushes for a 19-yard touchdown during the fourth quarter against the Notre Dame Fighting Irish at Darrell K Royal-Texas Memorial Stadium on September 4, 2016 in Austin, Texas. (Photo by Ronald Martinez/Getty Images)

Forget playing quarterback. The simple fact that Seth Russell is walking is nothing short of a miracle. The Baylor senior lowered his head against Iowa State last season and absorbed a helmet-to-helmet shot with safety Jamal Wiltz. Russell suffered a fractured vertebrae at the base of his neck. After a long recovery, Russell is back averaging 245 yards per game with 16 touchdowns. Expect him to go after UT’s John Bonney first and then Kris Boyd. There’s still no indication as to why Davante Davis and Holton Hill’s production dropped off so dramatically this season.

ESPN released its midseason list of the top 50 players in college football, and the nation’s third-leading rusher was nowhere to be found. Foreman needs 145 yards to become the first Texas running back since 2007 to reach the 1,000-yard mark. He’s averaging 142.5 in just six games this season while most everyone else has played seven. If nothing else, Foreman belongs in the Doak Walker Award conversation. Baylor was gashed for more than 200 rushing yards three straight weeks before shutting down Kansas (83 yards). There will be room for Foreman to roam.

Duvernay, a freshman from Sachse, was the most coveted of four recruits that left Baylor for Texas after the program became engulfed in controversy last summer. Duvernay admitted he wanted to play for former Bears coach Art Briles. It’s not hard to see why Briles wanted the 5-11 speedster. Duvernay has caught touchdown passes stretching 63, 75 and 80 yards for the Longhorns. However, it’s practically criminal how Texas hasn’t used him more. “I don’t think anyone can cover me,” Duvernay said without any hesitation on Oct. 18. That’s practically a clarion call for Baylor corner Ryan Reid and safety Orion Stewart.

KENDAL BRILES VS. STERLIN GILBERT (BATTLE OF THE OC’S)

While these two will not literally go head-to-head, they absolutely will be going against each other on the stat sheet. Both are running some variation of Art Briles’ offense. It seems logical that Briles’ son would know more than someone who worked under Briles as a graduate assistant in Houston in 2005. Baylor, which bills itself as #AmericasTopOffense, is 7-0 after bye weeks and averages 34 points in those wins. No matter what happens Saturday, Gilbert has done a wonderful job this season breathing life into the UT offense. The Longhorns are averaging 36.1 points per game, the highest total since 2009.

Texas coach Charlie Strong simply cannot afford another loss. He’s hanging onto his job by a thread at this point. The coach’s supporters can point to the team’s overall youth as a reason why he should stay for 2017. The Longhorns have played 15 freshmen this season and started five, including quarterback Shane Buechele. But his comment from several weeks ago will likely have the Bears stirred up. Speaking about UT’s offense, Strong said that TCU and Baylor had found success using “lesser athletes.” He was not putting down either program, but of course, that’s not how those two fan bases read it. Baylor will be fired up.