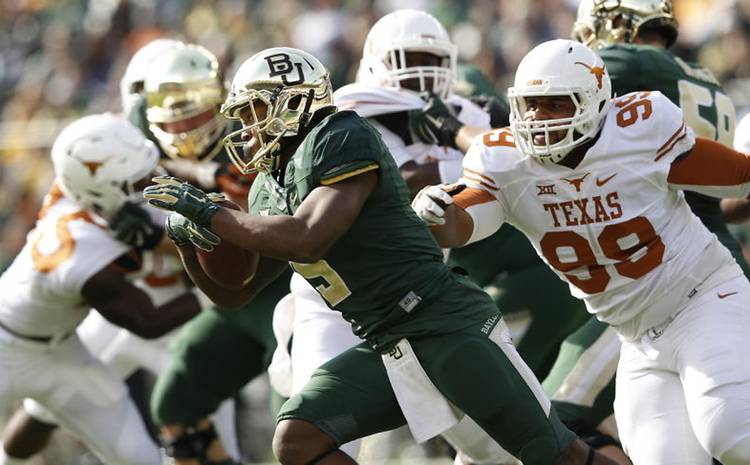 Baylor running back Johnny Jefferson runs against Texas during the first half at McLane Stadium, Dec. 5, 2015. (JAY JANNER / AMERICAN-STATESMAN)

Texas is less than a year removed from its 23-17 upset win over Baylor, but the Bears’ offense ended up being guided by a fourth-string quarterback for much of the loss. Seth Russell was sidelined by a neck injury for last year’s meeting in Waco, but he’ll be with the Bears on Saturday and is 14-0 as a starter. Russell has thrown for 1,470 yards and 16 touchdowns, and only four of his 177 passes have been intercepted. Russell is completing 57.1 percent of his passes, and he ranks fifth in the Big 12 in passing efficiency with a score of 152.1.

2. Will Baylor Shock Texas with its ground game?

3. Will Devin Duvernay get more than one look?

A one-time Baylor recruit who ended up in Austin in the wake of the Bears’ sexual assault scandal, Duvernay has made a splash as a freshman. His 80 and 75-yard touchdown catches are Texas’ two longest plays of the season, and he also had a 63-yarder against Oklahoma. Duvernay, though, only has 10 catches, and that 80-yarder was the only throw that went his way in last week’s 24-21 loss to Kansas State. Will Duvernay get more work against the nation’s sixth-best passing defense?

4. Will Texas finally give Baylor a test?

Baylor is unbeaten, ranked eighth in the country and is beating its opponents by an average of 26.5 points. But have the Bears really been tested, though? Four of Baylor’s wins have come against teams that currently have 1-6 records, and Oklahoma State had to travel to Waco on Sept. 24. Texas currently boasts a losing record, but the Longhorns haven’t been beaten at home. Baylor, however, has won four of the last six games in this I-35 rivalry.

Betting the Horns: This may sound scary, but the fun is over for the Texas defense

Q&A with a Baylor beat writer: ‘We’ll get a glimpse of how good the Bears actually are’